Home Awards Watch Awesome or Awkward: Why We’re Excited for the 2014 Golden Globes 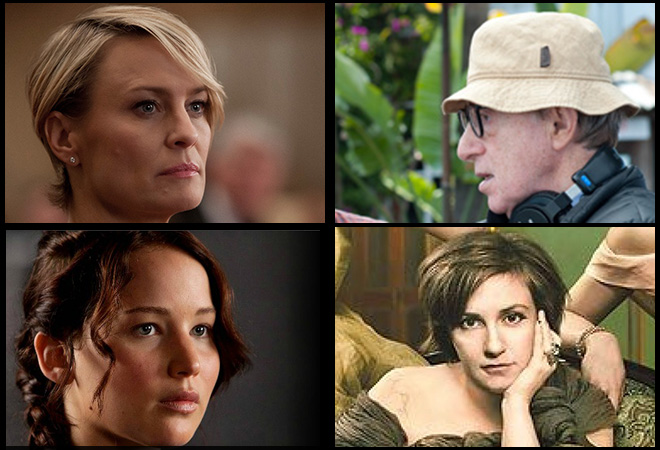 Awesome: Amy and Tina
Not only are Poehler and Fey the best Golden Globes hosts we’ve ever seen, they may be the best awards show hosts ever. We’re ready for them to take over the Oscars and bring a little lightness to the buttoned down telecast.

Awkward: Lena Dunham Trying to Walk in Heels
We love Girls, but if you saw Dunham at last year’s show, you know what we mean. She tottered around stiff-legged like she was walking on stilts. This year, she has once again received two nominations but we’re hoping she’ll ditch the heels and wear sneakers. It would be an amazingly bold fashion choice and she could totally pull it off.

Awesome: The Mixing of Movie and TV People
Back in the day before TV was the new cinema, the mixing of movie A-listers with the stars of the small screen had more of the whiff of noblesse oblige about it. Now, Breaking Bad creator Vince Gilligan is so hot he could probably pitch a show where Bryan Cranston reads the tweets of suburban accountants and get it greenlit before he walked out the door. Still, the blend of the two increasingly porous worlds.

Awkward: Regular People Trying to Be Funny
Last year, outgoing HFPA president Aida Takla O’Reilly came onstage and did a bit where she gamely attempted to hit on Bradley Cooper. She was stiff, we were cringing—though to be fair it would have been tough enough for a naturally funny person to pull that off. We don’t expect the president to dunk during the NBA finals or the Nobel Prize committee to do a soft shoe routine. Non-performers should learn from this mistake: Leave the shtick to the pros.

Awesome: Lady Power
Compared to movies, TV has generally been a more welcoming medium for women who have aged out of the ingénue years but aren’t ready to act in DrivingMiss Daisy (thanks for letting us borrow that quip, Goldie Hawn). This year that has been especially true with Robin Wright, Julianna Margulies, Sofa Vergara, Monica Potter, Edie Falco, and Julia Louis-Dreyfus among the nominees. On the movie side, June Squibb, a longtime character actress whose face you may recognize even if you don’t know her name, receives her first Golden Globe nomination at age 84 for her turn in Alexander Payne’s Midwestern family drama, Nebraska.

Awkward: Woody Allen’s Non-Speech
Last year’s Cecil B. DeMille award winner, Jodie Foster, took the opportunity to come out… sort of. Her long and rambling speech was touching (especially when Foster mentioned her mother and her family) but also a bit confusing. At least we know she’s single. This year’s recipient is Woody Allen but even this high-profile award probably won’t lure the die-hard loather of Los Angeles to the ceremony. While the HFPA hasn’t made any announcement, it’s a safe bet the New Yorker won’t be on hand to accept the award.

Awesome AND Awkward: Whatever Jennifer Lawrence Does
Maybe she’ll trip and fall on her way to the podium, reveal that she’s feeling gassy, or describe her penchant for sex toys. It doesn’t matter. Every gaffe only makes her seem more authentic and adorable. How is that even possible? We have no idea but we couldn’t love her any more than we already do.