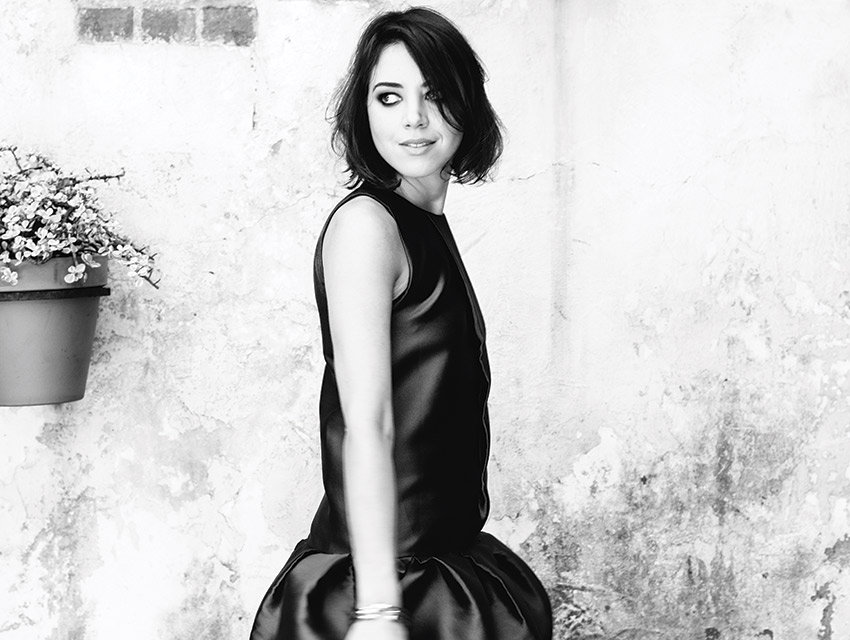 There are a few things Aubrey Plaza knows nothing about. Take the term “Angeleno” (“What’s an Angeleno?”) or the idea of trolling someone on Twitter (“What does that mean? Like follow them?”). Don’t worry. We explained both. But the 32-year-old Delaware-born, Los Feliz-based actress is no Jon Snow. Plaza is well versed in organized sports—she plays point guard on a local intramural women’s basketball team called the Pistol Shrimps, a name we highly recommend you say out loud for the sheer joy of it—and she knows who would be the perfect plus-one at any wedding. “Amy Poehler makes the party happen,” she says. “All she wants to do is dance, and all I want to do is dance. She has really good stamina, too—she can go all night. I want her to be my date to everything in life.” Plaza will have to settle for Adam DeVine in Mike and Dave Need Wedding Dates (out July 8),  in which two rowdy women (Plaza and Anna Kendrick) answer an ad to accompany the party-hearty Stangle bros (DeVine and Zac Efron) to their sister’s wedding in Hawaii. Raunchy marital high jinks, of course, ensue. Here she talks punny hashtags, her dream bridesmaids, and Judy Garland’s dribbling skills.

L.A. clothing trend you wish you could pull off at a wedding?
Wearing pajamas. I feel like people are walking around in their pajamas all the time here, and it’s totally acceptable.

L.A.-themed wedding hashtag?
I don’t even know about hashtags. What is that? Like when people get married?

Yeah, when people get married now they have these punny hashtags.
Oh, God. What a nightmare. This is the worst thing that’s ever happened to me. I hate puns so much.

You would hate me in real life.
I’m going to think about the hashtag. Let’s come back.

Marry, Kiss,  Kill, costar edition: Zac Efron, Chris Pratt, Robert De Niro.
Oh no, I don’t want to kill anyone! That’s such a harsh thing to ask. I guess  I have to kill Robert De Niro just because he’s the oldest one, so he’s going to die sooner. Well, maybe you can’t say that for sure, but I’ve kissed him enough. I don’t need to do that anymore. Kiss Zac because we’ve been in two movies where I wasn’t playing his love interest, which I think is kind of funny. I get to stare at his face, but I don’t get to make out with him. And marry Pratt because he’s my fake husband forever and ever and ever.

You guys are so good together, even if it’s fake.
I know. And what is “real” and “fake” anyways?

Local band you’d hire for your nuptials?
I’d ask John C. Reilly to get drunk and sing whatever comes to mind. I’m not a good person to ask—I have no fantasies of weddings.

Why John C. Reilly?
I’ve been to a wedding where he sang to a bride and groom, and then I’ve heard stories of him doing it at another wedding, and I’m like, Well, if I ever get married, John has to sing at my wedding.

And you said you never fantasize about your wedding.
You’re right. I think about it all the time.

Three uncommon essentials necessary to survive a wedding in L.A.?
A rope, a pair of handcuffs, and a big bottle of absinthe. I can’t explain why, but those are my answers.

Person you’d anonymously troll on Twitter for a day?
Probably Rob Lowe. He’s on there all the time posting annoying vacation pictures. He could take it.

Angelenos—dead or alive— you’d choose as bridesmaids?
Rashida Jones. Samantha Ronson because she would keep me in line. And all of the Real Housewives of Beverly Hills.

Pistol Shrimps are down by one in the fourth. Who do you trust with the ball: your idol, Judy Garland, or your costar, Judy Greer?
Even though I love Judy Garland more than anything, I’d trust Judy Greer because she’s tall and she’s got lanky limbs and you know she’s going to jump above everyone and dunk that ball. And Judy Greer is kind of feisty. I’d be afraid of her on the court. Judy Garland was, like, 4 feet 11. She’d be a terrible basketball player. Oh, and how about for the hashtag: #CalifornicationWithOnePersonForTheRestOfYourLife.