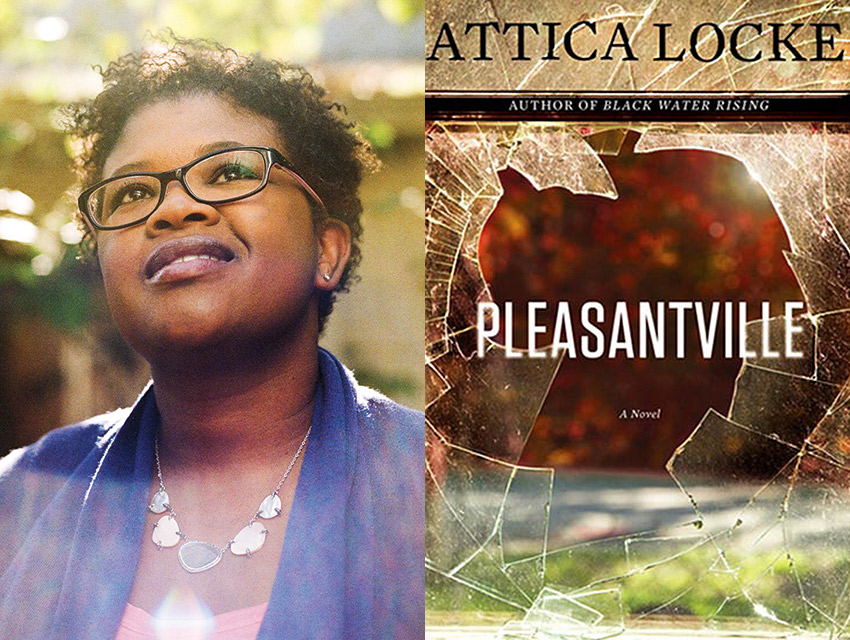 Run. Just Run.
It was a whisper inside her own skull, her mother’s voice actually, calling her home. But she should wait for her ride, shouldn’t she? She felt a stab of uncertainty, a panic so sharp it made her eyes water. Everything hinged on this one choice. I should wait for my way out, she thought, still wanting to believe a way out was possible, but already knowing, with a creeping certainty, that this night had turned on her, that her disappearing had already begun. She knew she’d made a mistake, knew even before she heard the van’s door open.
Just run.

Set in Houston 15 years after the events of 2009’s Black Water Rising, Texas-born (but L.A.-based) author Attica Locke’s new novel Pleasantville (Harper, April 21) begins with a grisly murder and only grows darker from there. The tome, Locke’s third, is a follow-up to Rising (the author cringes at the word “sequel”—she hopes that the book can stand on its own) and is equally as absorbing as its predecessor, written with a clear and graceful scrupulousness that draws the reader in from the outset. Locke, who is also a writer and coproducer of the Fox’s Empire, uses Pleasantville as yet another vehicle to discuss modern and historical racial equality (or lack thereof), political corruption, and the repercussions of a deep-seated greed. Here she talks process, finding inspiration in L.A., and avocado soup.

Why did you choose to base this book, along with 2009’s Black Water Rising, in Texas rather than L.A.?
I’m from Texas. I think it’s common for writers to return to their origins in fiction. Dennis Lehane has Boston. Philip Roth has Newark. Larry Brown had Mississippi.

What made you decide to write this sequel?
In truth, I didn’t decide. I resisted the idea of doing a “sequel,” and even still I feel compelled to put that word in quotes. I think the two books are very different. What came to me first was the idea of writing about a mayoral race in Houston because I had lived through one. Once I got into the story and the politics, I realized that [Black Water Rising and now Pleasantville protagonist] Jay Porter was the only person to tell the story.

Where in Los Angeles do you go to either gather inspiration or to write?
Any branch of the Los Angeles Public Library. I do all my research in Central downtown. I wrote part of my first book in The York in Highland Park. Taking walks in my neighborhood near Mount Washington is a big part of my process.

Has living in L.A. influenced your writing in any way? Your perspectives, point of view, character profiles?
The beauty of being an artist in L.A. is that there is a lot of literal and figurative space here. Unlike other cities, there are no canonical traditions here. You are free to break the rules. And will probably be applauded for it. As a writer, I feel free here.

Are your characters ever reflections of you?
I think my characters are very much their own people. They’re certainly reflections of me, but in the way my family members are. We are connected, but not exactly alike.

What first influenced and inspired you to write mystery/crime novels?
I think it’s just my worldview. I am fascinated by why people commit crimes and why they think they’ll get away with it. I will say that I was roommates with a compulsive liar in college, a girl who created a stalker who didn’t exist, whom she said was threatening to kill her. It was like living inside a Lifetime movie for a year. That was weird, and painful, but also strangely fascinating.

How do you balance writing for Empire with working on your novels? Do you ever find that they influence or reflect each other?
So far there hasn’t been a need to balance because I finished Pleasantville just before I started working on Empire. I think both are of a piece of a greater whole that I always come back to: I want to tell stories about race and class in America in the modern, post-civil rights era, the era in which I was born. But I don’t think it’s possible to do them both at the same time. For now, it’s all about the show. There’ll be another book.

What have you learned about L.A. from living here for 20 years that you otherwise would not have known?
That there’s such a thing as avocado soup.