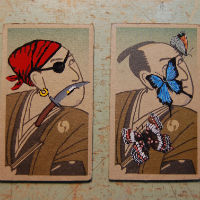 “Maybe we should call it the Cordary Gulch,” Axel Wilhite jokes to Paulin Paris as they stand on the wide concrete strip that separates their studios. He’s referring to Cordary Avenue, a quiet residential street off the 105 freeway in the northern part of Hawthorne, a town that was once the center of Southern California’s aviation industry. Behind the nondescript gates of no. 13703-13709, two rows of industrial garages face each other separated by a concrete pathway that serves as a parking lot. Despite the unprepossessing exterior, inside is a hive of activity with world-renowned artists working on projects alongside craftsmen and mechanics. They are not an art collective, simply a community of likeminded creative types brought together by happy accident.

The two buildings where Paris and Wilhite work also house the studios of conceptual artist Thinh Nguyen and sculptor and designer Robert Wilhite, Axel’s father. Visiting the residents of Cordary Avenue is like stumbling onto an underground museum where the exhibits—ranging from handcrafted wooden instruments that make no sound to a tree with shotgun shells for flowers—exist in a curious harmony with their industrial surroundings.

Robert Wilhite
“My preferred medium is wood,” says Robert Wilhite. “It’s like working with hard butter.” Raised in Ventura, Wilhite has been a fixture on the Southern California art scene for more than three decades. A member of the first graduating class of UC Irvine, where he studied under Ed Moses and Robert Irwin, Wilhite enjoyed a fruitful ’70s collaboration with the late French artist Guy de Cointet. In addition to his work as a sculptor, Wilhite is a well-known homewares designer, who has created custom furniture and a line of cutlery.

He doesn’t distinguish between his two modes of production; they are flip sides of the same coin, according to Wilhite. That’s evident in his work-space, which looks like a woodshop and is home to his 2009 piece “Fat Man,” a to-scale replica in black-lacquered hardwood of the atomic bomb dropped on Nagasaki in 1945. The piece lends an air of transparency and lightness to the sculpture’s terrifying symbolic value. It has only left Wilhite’s studio once, for an exhibition in Dallas. It’s also for sale. As Wilhite points out, that makes him the only private nuclear arms dealer in Southern California.

Paulin Paris
Paulin Paris traded his native France for Southern California a decade ago. Today he lives with his wife and children in Venice and works in a studio on Cordary Avenue. “I want to create an awareness of the world and the things we surround ourselves with,” he says of his work, which focuses on the use and reuse of familiar consumer objects. In addition to his paintings, some of which are on display in the studio, Paris produces unsettling sculptures, from body-like figures to cultish relics of a fictitious past, using plastic containers and other discarded packaging as molds.

“I find them all over the place,” Paris explains. “We don’t really see these objects. They just pass through, briefly serving a purpose.” His sculptures are studies in optic illusion, particularly “Space Cast,” a series of mannequin-like torsos cast in papier-mâché. From a distance they give the impression of being cast in iron, but up close the material reveals delicacy and shape: eyes molded from flower-shaped cookie templates, noses cast in a toy car wrapper. “They’re like remnants of our culture,” Paris explains, as his dog Gusta lazily barks at the mailman.

Thinh Nguyen
At the age of ten, Thinh Ngyuen immigrated with his family from a village in rural central Vietnam that had neither electricity nor running water to Orange County. The experience had a profound impact on him. Nguyen’s work explores malleable notions of identity, including a performance piece in which he walked around NYC’s MoMA masked by a giant knitted hood encouraging visitors to take photos of him beside the art on display, a conceptual mashup that questions issues of authorship and artistic identity.

Nguyen is engaged by the way that telling a story changes the story itself, and in the layers of cultural meaning that are added to these stories with every retelling.

“Paintings for the Visually Impaired” is an installation of paintings mounted onto the wall of Nguyen’s studio above neat spheres made from crumbled up canvases. Every piece in the installation is constructed from paintings and discarded canvases that Nguyen scavenged from dumpsters at institutions like USC and UCLA. “They’re all scraps from art departments around the city,” he says. “I’m interested in the process of remaking and reusing, artistic materials but also selves and identities.”

Axel Wilhite
“I kind of like to interject myself into conversations. I think that’s what my work does, too,” says Axel Wilhite, whose hand-painted Menko cards have recently garnered him international attention. Menko is a Japanese children’s game played with small cards (similar to baseball cards) elaborately decorated with samurais and other notable historical figures instead of athletes. Wilhite paints on top of these illustrations, sometimes adding to the original image by adding a hat or a flower to a samurai in warrior stance. On other cards, he completely erases the original image, reducing it to its bare lines and then making it anew. Each card is a fascinating act of syncretism, as battling samurais are transformed into Donald Duck and Mickey Mouse, attacked by face suckers from Ridley Scott’s Alien franchise, or confronted with giant crabs from Wilhite’s own warped imagination.

Wilhite began working with Menko cards in Chiba, Japan, where he lived for a year while attending school and studying kendo, the art of Japanese swordsmanship. It helped him deal with loneliness of being in a foreign country. “At first, it was something I did for the benefit of my dorm mates, who were also foreigners in Japan,” he says. “Painting the Menko cards is my way of connecting with Japanese culture.” On December 14, Wilhite’s first international exhibition, “Un Jeu de Cartes,” will open at La Manutention Gallery in Paris, France.