Home Uncategorized Athletes Are People, Too 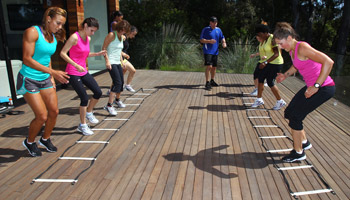 There are two types of people in the world: athletes, and everyone else. At least that’s what I thought as I took part in an outdoor Bosu-Burn class led by L.A.-based NFL Trainer Todd Durkin and including professional athletes Monica Hargrove (track & field), Kim Glass (volleyball) and Jen Hudak (ski racing) at a Beverly Hills home on Tuesday, a promotional event for Under Armour apparel. I also thought, Holy mother, if I do one more Bosu pushup I am going to vomit over the side of this lovely porch in the direction of those lovely Sunset mountains. I found out only later that the yellow running shorts I had been given to wear are called the ‘Escape Short’. I wish I had known that at the time…

The event was part of a 21-day series put on by UA and Muscle Milk to promote health, fitness, and UA. The brand, known for selling moisture-absorbent gear and clothing Michael Phelps, has recently been marketing the accessibility of its sporty representatives, trying to show that pro athletes are people, too.

But after Tuesday’s workout, I’m not so sure. I heaved and sweat while the heavily made-up pros showed off. When Todd dropped flat ladders on the porch and told us to do some hop-scotch variations, Kim, 6”2 and shark-eyed, performed them in fast forward. When we competed to see who could hold ‘the bicycle’ the longest, Monica, a UA newbie, came out on top. “I already did my core today,” she explained with a smile. Only the bravest tried the heavy rope. Nose-ringed, 23-year-old Hudak grunted as she struck the floor over and over again with its weight. When Kim took hold of the rope, she didn’t hold back, either. “That rope was my ex-boyfriend,” she joked after, catching her breath. She’s the extrovert among the three, a self-proclaimed “twitter whore” who loves to shop, and while Kim may have other interests, she spends most of her time training, like the other women. All three feel undervalued. Kim complained that she works year-round for only a fraction of the attention and financial compensation that American basketball and football players receive.

Though they play at the top of their games, the combination of being female and playing sports unpopular in the U.S. leaves them under-the-radar. “I try not to dwell on it,” said Hudak. Hargrove told me that she enjoys training in Europe because people actually recognize her there. Maybe things will improve now that she’s signed with UA. Either way, she’ll get a ton of free gear—and that stuff was surprisingly dry at the end of our workout.

Todd wound us down with yoga and meditation narrated with inspirational clichés and dramatic pauses. “Be humble, stay hungry,” he said, echoing a UA mantra. Those words resonated with me. Right when we broke, I straggled over to the kitchen for some chips and dip.