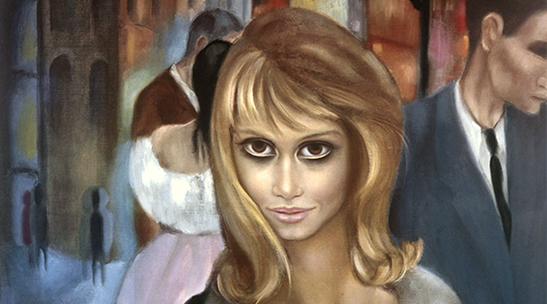 On Thursday night inside Littletopia, the section of L.A. Art Show dedicated to lowbrow and pop surrealism, Margaret Keane was honored with a lifetime achievement award. The artist, famed for her paintings of people (and animals) with massive eyes, has had a tremendous impact in this area of the art world.

“Right behind us, look at those faces there,” says Kim Martindale, partner and producer of L.A. Art Show, gesturing to characters with very large eyes lining the wall of a gallery booth inside Littletopia. He notes that Greg Escalante, the gallerist and Littletopia curator who passed away last September, was the one who suggested that Keane be this year’s award recipient.

Keane, who lives in Northern California, was unable to travel to Los Angeles to receive the award, which was collected by her daughter and son-in-law. She was, however, able to speak by phone the following day. “I was overwhelmed. I was just in complete shock,” she says of the honor. “I felt it was a real blessing.”

At 90, Keane still makes art daily. “I’m doing more drawings now than paintings,” she says, adding that, these days a lot of her pieces are mixed media, combining acrylics and watercolors. She usually has “four or five” pieces in progress at a time.

Keane’s longevity flies in the face of art world trends. Robert Williams, the artist famed as a pioneer of lowbrow, notes that her work became popular at a time when representational art had fallen out of favor. “She found an audience all through that period of time,” he says.

During L.A. Art Show, there’s a retrospective of Keane’s work inside Littletopia. There you’ll see pieces dating back to the early 1960s as well as more recent works. You can see how her style and subject matter shifts over the years and notice how her characters frequently take on the hairstyles and fashions of the eras in which they were made. The common threads, though, are the eyes. It’s not just the size of the eyes that grabs the viewer; it’s how expressive they are. It’s as if they’re so large because they hold a bounty of emotions. Looking into the eyes of Keane’s characters can be intense, as if you have walked in on private moment and are not sure how to respond. “I think a lot of people were afraid to look at them and still are,” says Keane. “They say they love them, but they can’t live with them.”

Yet, there are those who are not just fascinated by Keane’s work, but inspired by it. Over the years, Keane has seen how her work has influenced subsequent generations of artists. “At first, it kind of annoyed me and then it flattered me,” she says.

Keane says that she wasn’t aware of her work’s impact until the release of the Tim Burton-directed biopic Big Eyes. The 2014 film, for which Amy Adams won a Golden Globe for her portrayal of Keane, focused on the artist’s marriage to Walter Keane, who had initially taken credit for her paintings, and her struggle to get the credit for work that had become immensely popular in the 1960s. Keane was pleased with the results of the film. “Amy Adams couldn’t have portrayed how I felt, what I was going through, any better than what she did,” she says.

Keane also saw renewed interest in her art after the film’s release. “There were a lot that had never heard of my paintings, but then, there were a tremendous amount of people that had written to me and called me and emailed me from all over the world who have had my paintings, their posters, hanging in their grandparents’ homes,” she says. “They grew up with them and they told me how they affected their lives in many ways, sometimes even saving their life.”

Mab Graves grew up with Keane’s work. The Indianapolis-based artist recalls a seeing Keane’s prints in a guest room at her grandmother’s house. As a child, those pieces resonated with her and she began drawing huge eyes as well. Now, she paints her own large-eyed characters in whimsical settings. Graves’ pieces are on display at Red Truck Gallery’s booth for L.A. Art Show and she presented the Lifetime Achievement Award on Thursday. She says, “I think that every big eye artist can trace our lineage back to Margaret Keane.”

RELATED: Check Out Some of Our Favorite Pieces From the Massive L.A. Art Show