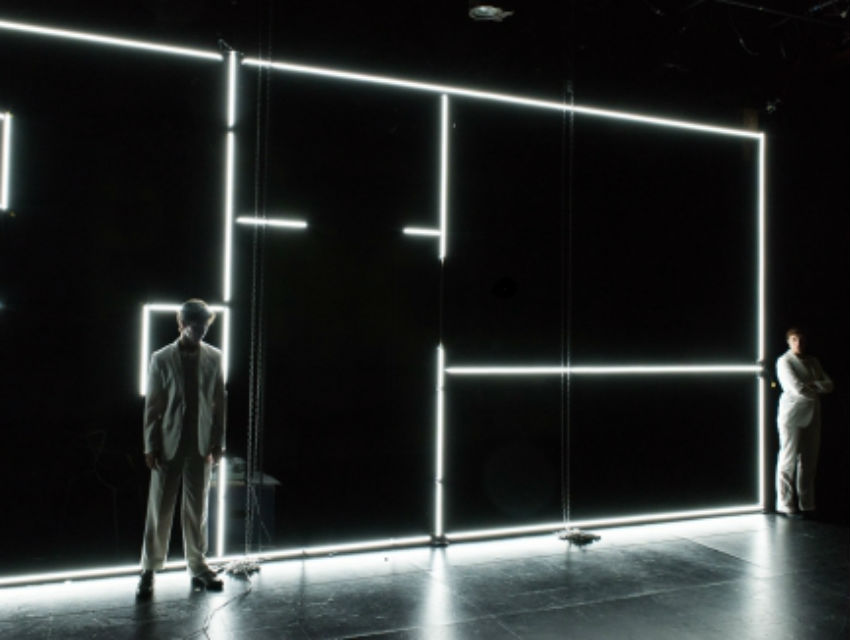 If there is anything more interesting to us than our own lives, it is the lives of our parents. In the play The Institute of Memory (TIMe), which ran at REDCAT over the weekend, artist and writer Lars Jan attempts a reconstruction of the life of his mysterious father, Henryk Ryniewicz. Comprising collaged texts drawn from archival records from The Institute of National Memory in Warsaw, Mass General Hospital and Youville Hospital, as well as Jan’s own (sometimes uncertain) memories of his father, the performance piece is a reminiscence, an exploration, and a eulogy—as well as a defiant act of separation from a man who posed as many questions as he answered. The play gives rise to an interesting question: Do our parents ever tell us the truth?

The show, which played to a sold-out audience, opens with two performers, dressed in white suits, standing alone in a glossy black set illuminated from above by a glowing white neon set piece. The neon artifact is movable and is moved, used variously as a wall, a tree, and a kind of room. The set piece is trademark Jan, art of the kind of beautiful originality for which he has come to be known. The actors interact with the set piece throughout the performance, working ropes and pulleys; it is almost a third performer in the show.

Action commences with Masson playing Jan, attempting to remember his father’s basement apartment in Cambridge, Massachusetts. Saunders breaks in at spaced intervals, with references to Jan’s father’s medical records, declaring, “Patient is a poor historian.” In medical terms, this means a patient is unable to give a good report of his medical circumstances; in terms of the performance, obviously, it means so very much more.

After this point the piece begins to pick up steam: Masson and Saunders re-enact imagined scenes between Jan’s father and mother, who separated when Jan was 20 months old. Questions of masculine and feminine identity are explored with almost excruciating honesty and presence, with the character played by Masson persistently dunderheaded and thick, and Saunders’ character sensitive, and fierce—sometimes so angry that she is unable to form words. Exchanges between the two are very nearly unforgettable: Masson says, “What would you do right now if you were not responsible?” Saunders snaps back, “I’d leave.”

In WWII, Jan’s father was a Polish resistance fighter; he was caught and tortured, which Masson’s character suggests informed much of his father’s personality and worldview. The traumatic nature of Ryniewicz’s personal history is transmogrified in The Institute of Memory (TIMe) into an interrogation of surveillance and privacy in the contemporary world: At one point, as the two performers continue their role playing, Saunders plays Edward Snowden, holding up a black and white photo of the NSA traitor/hero pasted onto a stick before her face. Saunders is particularly commanding as Snowden; her performance is simultaneously delicate and authoritative. She gets one of the show’s best lines, uttering that she fears that the “suburbanization of the Internet has deforested the wilderness of the mind.”

It might seem that this show is just the tiniest bit bleak. And yet, it is so very much the opposite. “When pressed,” Masson’s character says of his father, “he admitted to having the slimmest margin of hope.” And that slim margin of hope does not characterize The Institute of Memory (TIMe). In fact, the piece feels nearly incendiary with hope, particularly at its conclusion, when Saunders and Masson run in place, thunderously, and then proclaim, “We will never be domesticated.”

The 5 Best Things to Do In L.A. This Weekend, Hands Down