Home Art Art Takes You Out of Your Comfort Zone at Human Resources L.A. 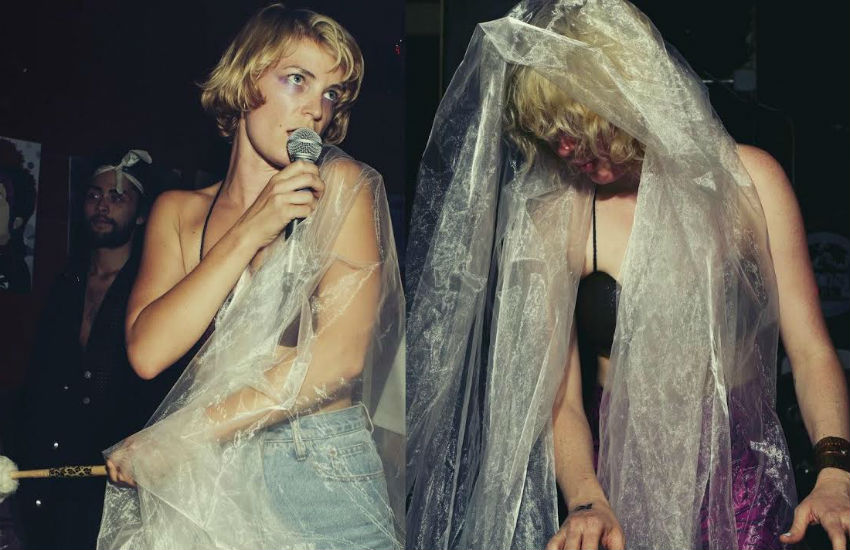 “Even as a programmer at Human Resources, you never really know what you’re going into at a show,” says the Chinatown-based art space’s Managing Director, Jennifer Doyle. The small volunteer-run art space (which used to be a Kung Fu movie theater), located on Cottage Home St. off Broadway, first opened its doors in 2009 and has since then specialized in curating exhibitions, concerts, and performance art events that break down the barriers between artist and audience. “When [musician and performance artist, ed.] Dorian Wood played a concert here a while back, we centered all the chairs in the room around his piano. The audience was as close as humanly possible to him as he performed,” says Doyle who is also active on Human Resources’ programming committee.

The ethos of Human Resources is a horizontal management structure, which basically means curators (or “programmers” as they say) have completely free range when staging a show or an event in the space “There are no leaders,” says another of HR’s programmers, Oscar Santos (who also teaches Visual Design at FIDM). “It’s kind of anarchistic that way.” The blank white walls are an empty canvas with unlimited potential. Santos is behind the exhibition, this coming Saturday and Sunday at HR, “Set the MOOD” by performance artist and musician AMRA (whose real name is Amelia Radtke).

“Her shows are a mix of experimental electronic music, hip hop, and dance, but there will also be elaborate costumes, installation pieces, and stimulating aromas,” Santos explains, when asked what people can expect at “Set the MOOD.” “Radtke’s show is a collaborative effort with artist David Park who built the impressive light sculptors, audiences will encounter.” Part of what attracted Santos to Radtke’s work under the AMRA moniker is the fact that she strives to create a complete experience—sight, sound, and smell—for her audiences.

“I appreciate having a space where the artist can surprise not just the audience, but the people organizing the event, too,” says Doyle. Show’s like “Set the MOOD,” where the audience is not only encouraged to interact with the pieces, but in some instances become part of them, are unthinkable at larger, more established art institutions. “We do host traditional art exhibitions but we mainly deal in immersive and experimental art,” Doyle, who is a professor at UC Riverside. “We did a show called “My Father’s Side of Home” by Carmen Argote, which among other things involved a sixteen hour sleepover at the art space. You just can’t do something like that anywhere else.”

Human Resources already has a packed schedule for early 2015, and Doyle highlights the upcoming group exhibition “The Border, Again” featuring artists who straddle the border between the U.S. and Mexico in their works. The small non-profit is also applying for outside funding so they can continue to grow Human Resources and provide even better conditions for the artists exhibiting there.

“My favorite thing about Human Resources is that every now and again people will walk out of here saying, I didn’t know art could be like that,” Doyle muses. “That’s exactly what art should be. A transformative experience.”

Margaret Cho on Asian Moms, Miley Cyrus, and the Politics of Comedy