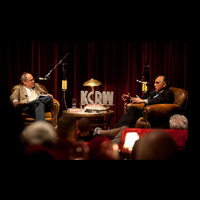 Twenty-five years ago, the Pulitzer Prize-winning author and cartoonist published the most influential comic book of our time: Maus. It centered on his father’s experience during the Holocaust. Jews were depicted as mice, the Germans as cats. Earlier this month, he published MetaMaus, a reflection on that masterwork, complete with a DVD, original sketches, and personal annotations. On October 9, in a taped conversation with KCRW’s Bookworm host Michael Silverblatt at the Soho House in West Hollywood, Spiegelman talked about MetaMaus.

To keep things straight, we’re talking about a conversation about a book that reflects on an older book that is itself an interpretation of a story about the Holocaust.

As Silverblatt noted at the start of the interview, this new release is more like meta-meta-meta-meta-Maus. The prefix, which translates to “self” for those of you who didn’t study Greek, quickly became the unstated theme of the conversation, with Spiegelman and Silverblatt exploring the idea that one might only speak meaningfully and comfortably about so enormous a human tragedy as the Holocaust from a distance.

And speak they did—to a standing-room-only crowd of about 100 in the Soho House’s swanky top-floor screening room. The conversation, which will be made available in its entirety on KCRW’s website this Wednesday, focused on Maus’s creation, its form, and its legacy, the major subjects of the newest book.

“There’s no one I’d rather be talking to in this circumstance,” said Silverblatt, who has interviewed Spiegelman some 15 times over the years. He calls Spiegelman his hero.

Spiegelman, for his part, isn’t quick to acknowledge his iconic status. At a pre-event confab with the press, Spiegelman said his life has just been about “stumbling through.”

“The root word of career is careen,” he said, smiling over a bottle of Diet Coke and a cigarette.

As with most breakthroughs, he never saw Maus coming. “I wasn’t out to tell people never again,” Spiegelman said. For him, the book was simply an outgrowth of his formal interest in comics, a challenge to himself to push the form to its artistic limits.

In other words, he wasn’t trying to change the world. But he did.