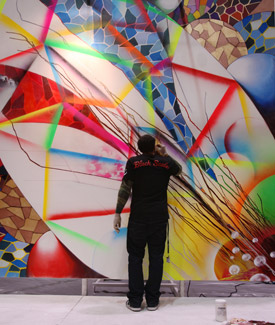 The slight smell of paint wafted in an out at the Los Angeles Art Show at the LA Convention Center downtown.

Not because the room was filled with paintings, but becausein one corner four artists were painting on large 11.5’x11.5’ canvases.

In the midst of beautiful people milling around examining artwork of all kinds, they immersed themselves in their work. Chor Boogie, jamming to music piped through his ear buds, climbed a ladder to reach the top of his canvas. Shark Toof crouched nearby, painting circles on his. The canvases of Andrew Hem and Edward Walton Wilcox were vacant, as they had taken a break from the four-day painting marathon.

Aside from the live art, the 16th annual LosAngeles Art Show, part of LA Art Month, featured thousands of paintings, sculptures, and installations.

John Baldessari’s “A is for …”, which is nothing like the kiddie version where “A” is for apple (his features oddities like a noose or an”Xmas” tree for each letter of the alphabet), was laid out like a keyboard.

And Karen Kalman’s “Hardware” exhibit popped with photos of gilded mouths. My favorite was a photograph of lips with gilding that looks like dirt and jewels that resemble pebbles.

Many of the pieces on display came to L.A. from other countries, including Korea and China, and they represented many different genres, from impressionism to modernism to street art. Brought together, they conveyed the idea that with art, there’s something for everyone.