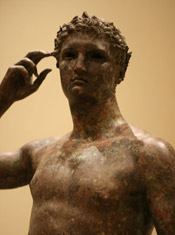 It sounds like the beginning of a classic whodunit: The president of a region in Italy, Gian Mario Spacca, has come to Los Angeles to broker a deal with the J. Paul Getty Museum that would settle a long-running dispute over a seven-foot-tall bronze statue that Italian courts have recently ruled was illegally removed from the country four decades ago.

The statue of “Victorious Youth,” which is also known as the “Getty Bronze,” is more than 2,000 years old and was found by an Italian fisherman at the bottom of the sea in 1964. In the early 1970s it made its way to London, where J. Paul Getty saw and loved it. After his death, the museum purchased the statue in 1988 for $18 million.

“It is of great interest to have the statue returned to Fano, from where it disappeared years ago,” Spacca said in a statement to the L.A. Times. “I trust that a museum as prestigious as the Getty will show the world that it is a cultural institution that behaves ethically.”

An announcement from the Getty and Spacca may be forthcoming after their discussions, but we expect a few more twists and turns—and a novel chronicling the saga, in hardcover and paperback editions—to follow.