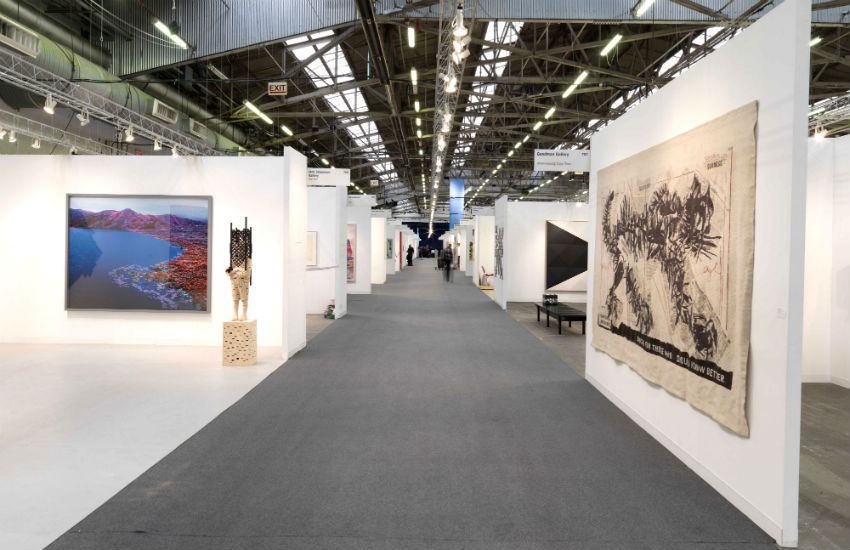 New York City is gearing up for the arrival of thousands of pieces of modern and contemporary art (and perhaps just as many gallerists and art collectors) from around the globe, as the city on the Hudson will be playing host to several major art fairs all at once over the next several days. Although west coast dealers have always been willing to brave Manhattan’s freezing temperatures in order to place their artists’ work in front of new eyes during “Armory Week,” Los Angeles gallery representation at the city’s annual March shows is more extensive than ever this year.

The biggest of the Armory Week fairs is the The Armory Show (March 5-8) itself, with 199 total participating art galleries, including 15 from Los Angeles, showing work at Piers 92 and 94 on the west side. “The L.A. art community is really having a moment right now,” suggests the Armory Show’s Executive Director, Noah Horowitz, “from a flourishing gallery and institutional scene to a huge number of artists who have recently taken up residence throughout the city. [Our] exhibitor list this year absolutely reflects that trajectory.”

Although the Anat Ebgi gallery, situated on La Cienega Boulevard’s gallery row, has participated in other New York art fairs before, gallery director Stefano Di Paola says the “much broader scope” of the Armory Show, where it will be exhibiting for the first time, “opens us up to be seen by a lot more people. It’s not just for young, emerging galleries and young, emerging artists. ”Ebgi, Hollywood’s Various Small Fires, and M+B of West Hollywood are among 21 international galleries less than ten years old that are showing work by one or two represented artists in the Armory Presents section of the fair.

Several prominent Los Angeles galleries are bringing work to the Armory Show’s main Contemporary venue. “New York brings a lot of collectors from all over the world,” Cherry and Martin gallery director Michelle Pobar affirms,“ and a lot of them are excited to see what’s coming from Los Angeles these days.” Even OHWOW, which has generally eschewed art fair participation in the past, will be showing up for the first time. “Face time with collectors in New York is important,” acknowledges OHWOW partner Al Moran. Otherwise, “some people don’t even see the work [they buy] until it gets to their homes.”

Just a few blocks south of the Armory Show, the SCOPE New York art fair’s 55 exhibitors will include six Los Angeles galleries. Described by co-founder Alexis Hubshman as “the X-Games of the art world,” the SCOPE franchise, which includes fairs in different cities throughout the year, defines its mission as “tapping into the cultural psyche to present only the most pioneering work across multiple creative disciplines.”

Soze Gallery director Toowee Kao describes this weekend at SCOPE as a “sneak peek” at the seven or eight artists who will be having solo shows in Soze’s West Hollywood space in the coming year, though all of the pieces she’s bringing to New York “were made specifically for this fair.” Gallerist Lawrence Cantor, based on West Adams, describes his participation at SCOPE as an opportunity “not so much to make money as to meet people. It gives me a voice in a cutting edge, young market.”

Further downtown, in the Chelsea art gallery district, Independent New York is “a little funkier” than some of the city’s other fairs this weekend, suggests Kurt Muller of the David Kordansky Gallery on South La Brea. “It’s a great way for us to show something more atypical or radical” to the New York art world, “something unexpected.” The Hannah Hoffman Gallery and The Box will also be there.

Four L.A. galleries will be showing work at Volta NY on Pier 90, right next to the Armory Show. Distinguished in part by its emphasis on one- and two-artist exhibitions, the Volta event is not quite as slick, not quite as polished as other fairs in town, according to participating Santa Monica gallerist Richard Heller. “The people there are super cool, and it’s all a bit more collaborative.”

Other Armory Week art fairs with a Los Angeles presence this year include PULSE New York, where Venice’s De Soto Gallery will be in attendance; Art on Paper, with Edward Cella representing L.A.; and the tony Art Dealers Association of America event at the original Park Avenue Armory site, where the Kohn Gallery is showing work by California artists.