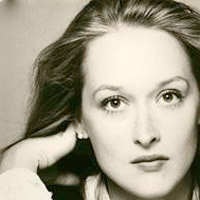 The Autry National Center and The J. Paul Getty Museum have exciting new additions to their collections

The Autry National Center announced yesterday that is has received more than 9,500 photographs (along with negatives, transparencies, contact sheets, and more) from the estate of the late great photographer Theo Westenberger, who grew up in a Richard Neutra-designed house in La Canada-Flintridge and became the first woman to shoot covers for Newsweek and Sports Illustrated. The portrait of Meryl Streep at right is hers, too. The museum will now set up an archive including exhibitions, an online database, and a series of programs to honor Westenberger’s work. First up: the “Theo Westenberger Lecture in the Arts” scheduled for April 30.

Across town, the J. Paul Getty Museum announced that J.M.W. Turner’s Modern Rome – Campo Vaccino (1838-39) will go on view today. The painting, the fourth Turner work in the Getty Museum’s collection, was only recently acquired. Turner fans take note: Los Angeles now has “the largest concentration of works by Turner in America outside the Yale Center for British Art in New Haven and the National Gallery of Art in Washington, D.C.” The painting will be on display in the Getty Center’s West Pavilion.