Home Music In 1972, Aretha Franklin Graced a Church in Watts with a Legendary... 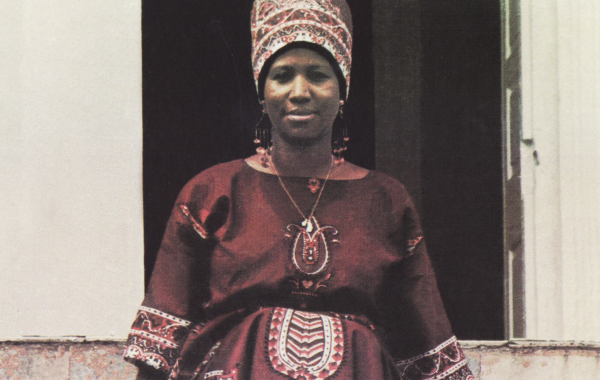 “Aretha came in and the place went wild with soul stopping hallelujahs,” Elliot Johnson, who witnessed the concert, recalled in a 2015 story for Neighborhood News Online. “This was as positive an experience as you have ever seen. It lasted forever and ever and that was fine with all of us.”

How exactly Franklin came to record her first live gospel album at a church in Los Angeles rather than, say, the New Bethel Baptist Church in Detroit where her father, C.L. Franklin, was the minister (and where she would, ultimately, record her other live gospel record, One Lord, One Faith, One Baptism, in 1987), is a matter of some debate.

Jerry Wexler, the Atlantic Records producer who worked closely with Franklin, has asserted that the project was originally his idea. Franklin disputes this, saying she came up with the concept herself. In his book about the making of the album, Aretha Franklin’s Amazing Grace (33 1/3), Aaron Cohen writes, “As to who came up with the idea, whether it was Aretha Franklin or Jerry Wexler, is something they’re going to be debating in heaven 100 years from now.”

But, while she may not have been in Detroit, she was surrounded by connections to her earliest days in the church. Her father was there, and can be heard giving remarks on the album, and for musical direction, she was accompanied by Reverend James Cleveland, who had lived with the Franklins in Detroit and been a piano and singing mentor to Aretha in her youth.

Cleveland had moved to L.A. in the 1960s and released several big gospel albums of his own. In 1970, he was fired by the church where he was working over the perception that he was pushing pop music rather than worship song; when he founded his own church most of the congregation followed him and his envelope-pushing ideas about how gospel music could sound. Ideas he and Franklin shared.

“There was a new culture in our church to use some of the other instruments. Drums were still very new,” Pastor Alexander Hamilton of New Temple Missionary, who directed the Southern California Community Choir for Franklin’s performances, told KPCC. “As the change was happening, here comes Aretha in ’72 and we’re going to use an entire rhythm section, which was rather radical.”

Her musical style, blending traditional gospel with elements of soul, blues, and even rock ‘n’ roll, was not the only radical thing about what was happening in the church. She was a star of popular music, returning to her own roots, taking the stage of a black church in a neighborhood that was still marked by riots and unrest.

“We had just come through the ’60s, we were just making the transition from ‘colored’ to ‘negroes’ to ‘black’. ‘Black is beautiful’ had just come out in the mid-’60s,” Harrison recalled. “You look at Aretha, and while you see the artistry and the command of the voice, you also see in her the humility. She was not the Aretha in lights that you see on the stage. She was just Aretha, our sister, singing for the Lord.”

While she may have been singing for the Lord first and foremost, she was also singing for an audience here on Earth. The church, in a modest converted movie theater, was filled to standing room for both performances. Some of the faces are famous, like gospel star Clara Ward, who was gravely ill but came to sit in the front row for Franklin’s show, and Mick Jagger and Charlie Watts of the Rolling Stones who, shortly after seeing Franklin, would record their own best attempt at a blues- and gospel-tinged album, Exile on Main Street. But most of the crowd consisted of congregants and people from the neighborhood.

“I was just excited! I had never seen anything like that in my life. I felt like I was royalty,” Regina Ford told KPCC. “I talk about it today, ‘Remember that Amazing Grace album? That was made at our church!'”

The two-disc album compiled from the performances was released on June 1, 1972, and it was an immediate hit. It would be certified double-platinum in short order and became the best selling record in Franklin’s entire discography.

Filmmaker Sydney Pollack was allowed to bring in a crew record the proceedings. It was the era of concert films, right on the heels of Woodstock and Gimme Shelter, and Warner Brothers, which had recently acquired Franklin’s label, Atlantic, planned to screen the documentary as a double feature with their upcoming release, Superfly, to cross-promote the record.

Unfortunately, on the night of the concert, Pollack–who had been Warner Brothers’ last-minute selection to helm the project, not the first choice of Franklin’s team–forgot to bring clapboards to the church, and went ahead shooting without marking the footage. Without those markers, it proved nearly impossible to properly sync the audio and video tracks using the technology of the era. Editing dragged on, but was eventually abandoned, and left uncompleted at Pollack’s death in 2008.

He transferred the footage to a producer and UCLA professor, Alan Elliott, with instructions to complete the final film. When Elliott attempted to send it out for film festival screenings in 2015, Franklin sued to block the release of the 43-year-delayed documentary. That litigation tied up release for a time, but as of 2017, Elliott remained confident that it would eventually see theatrical release.

RELATED: A Look Back at When a Black, Female Newspaper Editor Took on the KKK in L.A.