Home Uncategorized Are You There Judy? It’s Me, Zeitgeist! 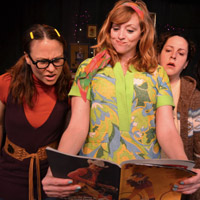 Her most famous books were published somewhere between the Nixon era and the Reagan administration, and yet the work of Judy Blume is an enduring cultural touchstone, particularly her most widely-read young adult novel, Are You There God? It’s Me, Margaret. That teenage tome was written so long ago, the main character describes the discomfort of wearing a sanitary belt. A what? Exactly. Nonetheless, the candid coming of age story has been the source material for countless homages, riffs, and parodies, from Chelsea Handler’s best selling memoir to a new musical, Are You There God? It’s Me, Karen Carpenter, which opens tonight at the Cavern Club Theater for a two-weekend run. The production merges the adolescent angst of Margaret with a more tragic figure of cultural fascination: Karen Carpenter, letting tunes by 1970s superduo the Carpenters lend some undoubtedly groovy gravitas. A Q&A with Dane Whitlock, the creator, writer, and director of the show, helps explain why over 40 years later, Blume is still fresh.

LA MAG: When did you first read Are You There God, It’s Me Margaret? What were the circumstances—especially since you’re a guy?

DANE WHITLOCK: I was in the fouth grade when I borrowed the book from my cousin? Classmate? Can’t remember. And by “borrowed” I mean “stole” because I was too embarrassed to ask for it. Boys were supposed to read other books like Where the Red Fern Grows and Sounder. Boys were not supposed to know about such things as sanitary belts and bust increasing exercises.

LA MAG: What elements of the book are incorporated into Karen Carpenter story?

DW: The plot is basically an abbreviated parody of the book by Judy Blume with songs of the Carpenters sprinkled in here and there to advance the plot. There’s something inherently hilarious about a fourth grader being so over her life that she just HAS TO launch into Rainy Days and Mondays. “Talking to myself and feeling old….”

The plot revolves around Margaret Simon navigating the trials and tribulations of moving to a new town, crushing on the boy next door, joining a secret girl’s club, obsessing about bras and sanitary belts and — finally becoming a woman! All while singing the songs of the Carpenters.

LA MAG: Have you met Judy Blume? Is she aware of this play?

DW: I have not. And I don’t think she is. I would love for her to come though. It’s a parody, but it’s handled with a lot of love and respect for the original material.

LA MAG: What is it about Judy Blume’s work that people—adults way past adolescence—still respond to? In other words, what is it that they’re getting out of your show?

DW: Judy Blume’s characters resonate with so many of my generation. We grew up in the time frame that these books were written and as we grew older, so did her characters. You may have started out by reading Frecklejuice or Tales of a Fourth Grade Nothing. But as you got a little older, you most likely moved on to reading Are You There God? It’s Me Margaret or Then Again, Maybe I Won’t (the boys’ coming of age novel). THEN as you entered into the middle and high school years, you probably picked up a copy of Deenie or Forever where the characters were masturbating and having sex. It was a kind of like a series of manuals designed to help you get by. She made you think that she was writing just for you — telling YOUR story — so that you didn’t have to feel like such a freak. What are they getting out of my show? A hell of a good time. Judy Blume + Carpenters = Amazingpants.