Home Film ArcLight to Open in Santa Monica. Until Then, Here Are 5 of... 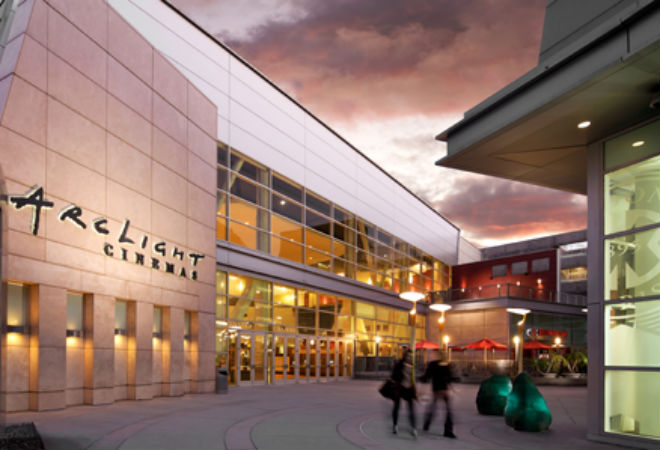 When the first Arclight Cinemas opened in Hollywood in 2002, it wasn’t merely another movie theater; it created the luxury theater niche and offered consumers a new way to experience movies. Zero commercials before features, state-of-the-art screening technology, plush seats you could reserve in advance. A dozen years later, ArcLight has five theaters in the Los Angeles area and last week the company announced plans for its newest L.A. location.

In the spring of 2015, ArcLight will open in the swanky Santa Monica Place mall, where it will be located on the third floor above Bloomingdale’s. ArcLight Santa Monica will offer a full bar, a café, and concessions as well as a lounge area where patrons can enjoy drinks during select screenings.

Don’t want to wait a year to sip cocktails and munch on truffled popcorn while you watch the latest experimental Albanian heist comedy? Here are five of L.A.’s swankiest movie theaters.

The Landmark
The Landmark on Pico and Westwood has all the amenities required for a luxurious night at the movies: gourmet snacks, drinks at select screenings for the 21+ crowd, and small theaters with couches for those who want to cuddle (or nap). In addition, the theater screens everything from Hollywood blockbusters to critically praised foreign movies.
Where: 10850 Pico Blvd., West L.A. More information

Sunset Sundance Cinema
After revamping the former Laemmle Sunset 5, the Sunset Sundance Cinema opened in the summer of 2012 with offers a state-of-the-art viewing experience in chic surroundings. The Sundance Bar Bar, located in the lobby, has everything from fine wine to ice cold beer on draft, along with an assortment of delicious snacks.
Where: 8000 W. Sunset Blvd., West Hollywood. More information

iPic Theaters – Pasadena
The chairs are the size of La-Z-Boy recliners and the in-theater menu boasts everything from nachos to mahi mahi sliders. Did we forget anything? Right, there’s Salt Lounge in the lobby, which mixes cocktails from fresh local ingredients and housemade custom infusions. Parent company iPic plans to open another location in Westwood in the former Avco Cinemas space.
Where: One Colorado: 42 Miller Alley, Pasadena. More information

Rave Cinemas 18 + IMAX
Located on the Promenade at Howard Hughes Center, this fancy theater offers all the standards of upscale movie watching—stadium-style seating, a restaurant, an in-theater bar—as well as the option of renting your own Birthday Party Room for private events.
Where: 6081 Center Dr., Westchester. More information

MGN Five Star Cinema
Glendale’s MGN Five Star is a ten-screen multiplex that includes Frame 128, a gourmet restaurant run by Chef Kareem Shaw. You can enjoy your meal while watching the movie or sit down for dinner after the movie in the outdoor courtyard.
Where: 128 Maryland Ave., Glendale. More information