Home Uncategorized Another Side of Dylan 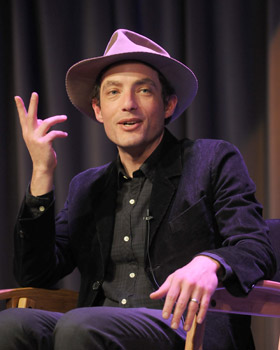 It could have been him. The resemblance was striking: That fine, thin frame, the gambling hat topping off his smallest of gestures. When the video that introduced The Drop: Jakob Dylan at the Grammy Museum on Monday night opened with a faceless silhouette talking about Grammy- and Oscar-winning producer T-Bone Burnett, I thought I was watching footage of Bob Dylan.

The album, which was recorded in Santa Monica over a five-day period last summer, has Dylan exploring American roots music. “Nothing But the Whole Wide World,” which kicks off and sets the tone for the album, is a traditional folk song beautifully and simply arranged. “Down on Our Own Sheild” is a dustier, darker ride across a “cold-blooded low-down dirty world” where “yellow lanterns walk a circle around our bit of earth.” “Lend a Hand,” with its horns and sexy rhythm, slinks right through New Orleans, and “We Don’t Live Here Anymore,” a haunting ballad for the displaced, thematically and musically nods to Bob Dylan.

For Jakob, who’s largely sidestepped his father’s long shadow as the frontman of The Wallflowers, it’s a significant move. He may still be uncomfortable discussing his childhood (it took a few prods from Grammy Museum director Robert Santelli, who conducted the discussion, to get Jakob to share that he first met T-Bone Burnett on the Rolling Thunder Revue tour when he was a child, and Jakob later described his relationship to his father’s legacy as “complicated and uncomplicated”) but he came across as confident in Women and Country. He should be. The album’s great.

The only disappointment of the night? That Dylan didn’t perform the songs live. Thankfully, he’ll do just that this summer. A tour with Neko Case and her band kicks off in Pittsburg today.