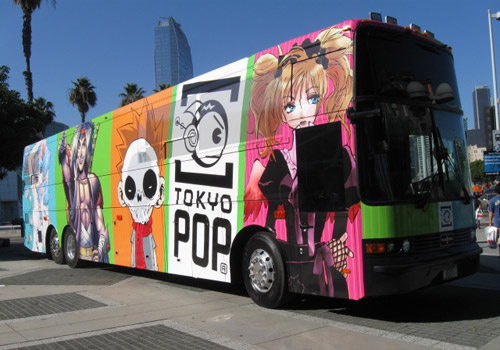 Exported Japanese animation (anime) and comics (manga) have taken permanent residence in pop culture in L.A., and the North American mecca of it all is Anime Expo, or AX. Although not the oldest anime convention in the US (that title goes to A-Kon in Dallas), AX is one of the longest in duration with four days of activities. Fans often arrive dressed as their favorite anime or video game characters to enjoy dozens of panels, scrounge the dealer’s hall, relax in the manga library, people-watch, attend the concerts, check out local artists, and oh yes, watch anime. Korean music and comics (manhwa) also have a foothold here, as does original-English-language (OEL) manga.

Anime Expo 2010 was held at the Los Angeles Convention Center over the Fourth of July weekend and was put on by the Society for the Promotion of Japanese Animation (SPJA); they created those advertisements you’ve seen on the back of city buses. This year, fans were treated to music acts AKB48 and Sophia, anime voice actress Yui Horie and actor Katsuyuki Konishi, and director Shinichi “Nabeshin” Watanabe, among others.

So, where is the greatest anime fan located? TOKYOPOP, a popular publisher of English versions of manga here in the United States, wants to know exactly that, and the company set off from AX on a 12,000-mile tour to find “America’s Greatest Otaku.” TOKYPOPO founder Stu Levy, his staff, and the Otaku Six (six lucky college students from around the country) piled on a bus and are heading to twenty-plus cities including Salt Lake City, Utah, and Newark, Delaware. They’ll also hit conventions like San Diego’s infamous Comic-Con and Baltimore’s Otakon. If you think you’re the greatest otaku, you can submit an application through their Web site or accost the crew in person. The winner will receive a trip to Tokyo, and a Web series following the competition will premier on Hulu later this year.

Although the TOKYOPOP Tour did not have an official panel at the expo, the publishing company had an industry panel on Friday to introduce their upcoming manga release schedule. Stu Levy popped in briefly to discuss the Tour’s ambitions, and the Otaku Six were self-introduced. There was another panel on Saturday to introduce TOKYPOP’s first live-action mockumentary based off the OEL comedy/adventure manga Van Von Hunter. In the video, keep an eye out for the office building housing TOKYOPOP—it’s where Los Angeles magazine offices are, too.