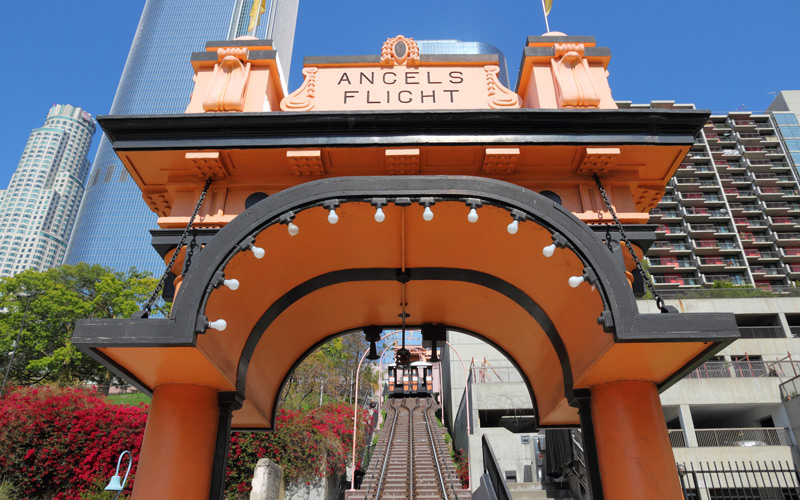 It’s been four long years since Angels Flight, aka the world’s shortest funicular, has been open to the public, but the historic railway-slash-escalator will be up and running once again starting Thursday, August 31.

The iconic tram between DTLA’s Hill and Olive Streets was shut down in 2013 for a casual $5 million safety upgrade, including the addition of an evacuation stairway. As the Angels Flight team worked to reopen the funicular, it had been sharing updates on Twitter in the form of a conversation between the twin cars, Sinai and Olivet. In the past few months, they’ve brought in goats to clear brush under the railway, tented the wooden cars for termites, and given the railway a fresh coat of orange paint.

Olivet Observes: Whoo-hoo! Fresh clothes (so to speak)! The Station House is getting a fresh coat of paint! pic.twitter.com/qaiHfcL54T

At 298 feet long, Angel’s Flight is the world’s shortest railway, with a long, fascinating history that includes appearances in countless TV shows and movies, most recently La La Land. It opened for business on December 31, 1901, but by 1969 redevelopment in the area led to the railway’s dismantling. It was stored for 27 years before being rebuilt half a block south. It has been closed several times for safety issues, including a derailment in 2013. Earlier this year the California Public Utilities Commission certified that the latest improvements meet the highest safety standards, so the historic funicular is on track.

When it reopens, Angels Flight will connect the Pershing Square Metro station and Grand Central Market with the top of Bunker Hill, offering access to MOCA, the Broad, and the Walt Disney Concert Hall.