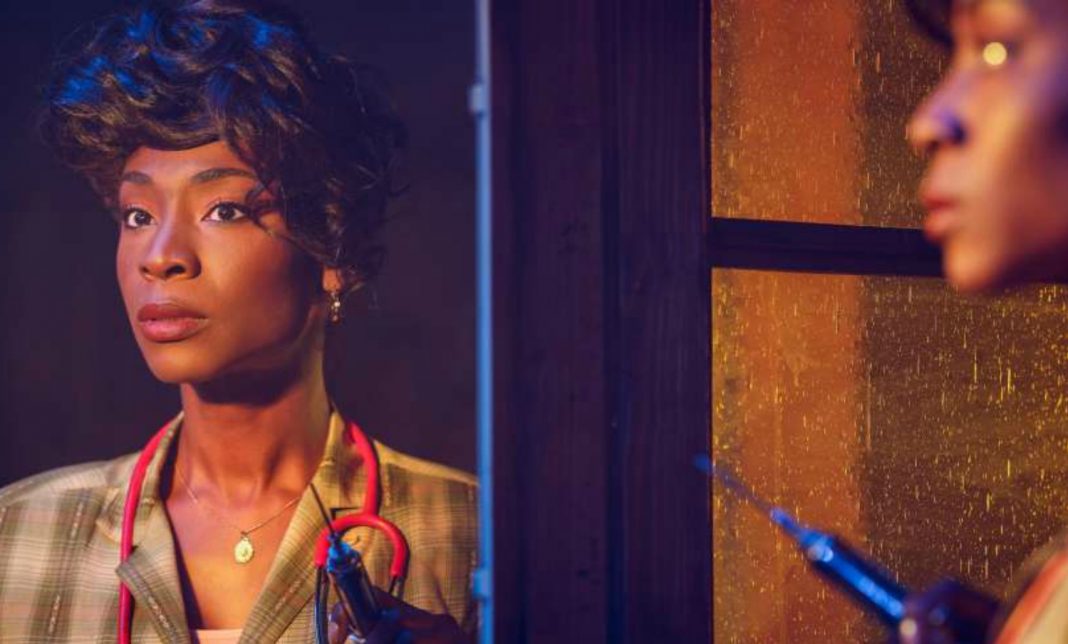 This year, actress, businesswoman, and rousing activist Angelica Ross made history. When it was announced that she’d be joining the cast of American Horror Story: 1984, she became the first trans actor ever to land two series-regular roles on television (it followed her beloved turn as Candy on FX’s phenomenon Pose). Now airing on Wednesday nights (also on FX), AHS:1984 casts Ross as Rita, a tough nurse with a checkered past who works at a summer camp where beheadings are more common than barbecues. We caught up with Ross to find out what movies and shows scare her the most, and she didn’t disappoint.

It’s my all-time favorite scary movie. I have a weak stomach, so I’m not really into gore, but I love suspense, and Get Out was also such a great horror movie because it was so relatable. I think that’s what makes a great horror movie: You leave, and you go back to your daily life, and you’re like, “Oh my God, that could be happening right now!”

All of them…Scary Movie, Scary Movie 2, Scary Movie 3… What I like about these is there’s a mix of comedy and scares, so you’re not just sitting there freaking out the entire time.

This was one I saw when I was much younger, and it was one of those creative films that had you so scared, but you really didn’t see anything. It really freaked me out.

Tales From the Hood

I thought this was so creative and, again, funny. And it was the first time I remember thinking, it’s the reverse of the trope of the black person being the first one to die in the movie.

Vampire in Brooklyn
I loved this film, with Angela Bassett and Eddie Murphy. And again, it was a movie I never really expected to see. Before then, I hadn’t really recalled a lot of black horror films. I know there’s Blacula, but I’ve never seen that one. [Laughs]

A Nightmare on Elm Street

This is one of the films that terrified me most, and I liked it, but I can’t say I’d wanna watch it again. I really liked all of the Nightmare on Elm Street films, because they were funny and they were good, but they also really messed you up because they’re about how you can’t fall asleep.

You know, “Walk into the light, Carol Anne!” All of that. That movie was scary. Very, very scary. But it was still one of my favorite films back then as far as horror movies are concerned.

I really like this show. I don’t think you’d consider it horror, but rather more of a thriller. There are creatures in it. I think something that’s more on the level of what kids can watch is also my level of horror.

When Halloween comes around, this is always the movie that I watch. I can’t wait. Same thing goes for Death Becomes Her with Meryl Streep, Goldie Hawn, and Bruce Willis. It’s gruesome, but at the same time, when those gruesome things are happening, you’re still laughing.

I fell in love with that season. After I saw Coven, I was determined to watch the rest of the [installments]. Murder House was way too damned scary for me, but I love Apocalypse, especially when it turned into a Coven season. Earlier this year, Ryan Murphy posted on Instagram that Gus Kenworthy would be joining the cast this season, and I remember writing in the comments, “I’m ready to join the coven.” And the next thing I know, I’m being cast in the show.

RELATED: Scream Queen Emma Roberts Is Afraid of Everything