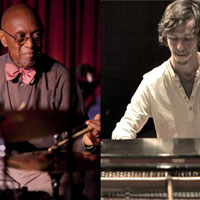 From modal music to improvisational explosions, Los Angeles becomes the epicenter of all things jazzy when the 10-day Angel City Jazz Festival kicks off tonight. High notes include:

Among the big names and established acts, one pairing is particularly fascinating: pianist Richard Sears with drummer Tootie Heath, a man who played with Coltrane, Herbie Hancock, and Yusef Lateef. Sears, a young alumnus of USC’s Thornton School of Music, is a killer on the keys. He has made a name for himself on the L.A. jazz scene, conjuring mind-blowing frenzies and beautiful breakdowns from a Rhodes electric piano, an organ, or the ivories. His fingers tap across the black-and-whites, stutter-stepping and tap dancing up and down scales. He balances movement with stasis, hanging onto a note before tumbling into swirling eddys. Sears also performed a series of private living room shows for small audiences; teamed with Heath and a full sextet he brings an interesting confluence of old school talent with new school imagination to the Ford’s large, open-air big stage.

We caught up with Sears to talk about working with a legend, Los Angeles’ jazz scene, and some standouts at Angel City.

You’ll be playing with Tootie Heath, who performed with Coltrane and other greats. How do your playing styles compliment each other?

Musically, Tootie has firmly placed one foot in the world of straight-ahead jazz and the other in the world of experimental jazz, which is similar to my own practice. For some, the music associated with Duke Ellington is exclusive to the music associated with Ornette Coleman. Tootie blurs the lines between those worlds, which contributes to the sense of timelessness in his playing. I’m trying to follow his example.

What do you like about playing with mature musicians? What are the challenges?

Tootie is one of the last living authentic bop drummers but also a master storyteller, comedian, and compassionate human being. I feel fortunate to play with him. He played [Thelonious] Monk’s tunes with Monk in the 1950s; it is inspiring to know that this same person at age 78 still has so much to offer the world. Tootie is a consummate accompanist and has built a career by making the music easy for his band members.

Who are some of the must-see acts at Angel City Jazz Fest?

Angel City has a great line up this year, which makes it hard to pick only a few. I’ve always been a big fan of Terence Blanchard and his band. I look forward to hearing Jim Black as well. The whole October 6th lineup is stellar and provides the most variety in playing styles, age, and musical background. Also, Tootie is moving to New Mexico in two weeks and this will be his last L.A. performance in the foreseeable future.

What is the scene like for young jazz musicians in Los Angeles? Is it competitive?

Yes, it is competitive but not like New York. There are more great young musicians in Los Angeles ever, making this an exciting time to be in L.A.

What are some of the best places in L.A. to catch up-and-coming jazz musicians?

The Blue Whale and any Angel City event, period.

You were performing a series of living room shows throughout L.A. Why? And are you still doing those?

I love playing in intimate listening environments where the singular focus is the music. Living room concerts nourish that kind of space and provide some of the more rewarding playing experiences. I don’t have any scheduled for the future but I plan to do so.