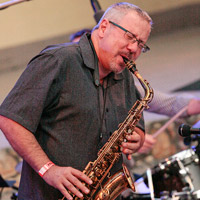 There was so much music spilling out of the Ford Amphitheatre on the third day of the Angel City Jazz Festival that you almost needed to find an exit to catch your breath. Even outside there was music, as a collection of smaller combos performed under the banner of the L.A. Jazz Collective. The only answer: submit.

The concert started out soft and quiet in the late afternoon sunshine with the Peter Erskine New Trio. Led by the ex-Weather Report drummer with his bassist nephew Damian Erksine and pianist Vardan Ovsepian, the combo unfurled songs from their new CD Joy Luck, including a subtle and slippery cover of Jerry Goldsmith’s theme for the 1950s TV show Dr. Kildare.

Next up was a quintet led by double-bass guru Mark Dresser, visiting from UC San Diego. Dresser executed stinging slides that intertwined with the sandpapery sounds of Denman Maroney’s “hyperpiano.” (Essentially a grand piano tricked out so it can be played on almost and surface.) Dresser had brought saxophonist/clarinetist Marty Ehrlich from New York. Along with special guest Bobby Bradford (who taught both men), they relived their early ‘70s glory days playing in the ad-hoc free jazz collective Black Music Infinity with Stanley Crouch. Dresser and Ehrlich paid tribute to Bradford with a slowly unfurled version of the cornetist’s “Comin’ On” and “BBJC,” a song dedicated to Bradford’s late musical partner John Carter. Ehrlich (arguably) might have been the only clarinetist who could match Carter’s infamous high-pitch, warped-NOLO clarinet runs.

The next quintet was a perfect example of musicians working apart while together. The sax-trumpet duo of Ambrose Akinmusire and Walter Smith III played their melodies in tight tandem with Akinmusire standing behind the band during the solos then stepping up to deliver a trumpet sound that aped Miles Davis’ short lyrical bursts. He somehow retained Clifford Brown’s metric complexity but added a piercing toreador tone infused with ideas that were all his own.

The headliner, promethean saxophonist Archie Shepp, hadn’t graced an L.A. stage since 1986, and he seemed to be re-acclimating himself. Looking like a Kansas City hepcat in a blue-grey suit, long coat, and matching fedora, Shepp extended a hand to the hometown crowd with “Hope 2,” a song dedicated to the late, underappreciated pianist Elmo Hope, who decamped from New York to Los Angeles in 1957. When Shepp soloed, you could hear the collective sigh, Ah, there it is. Leaning back on his perch, he played deep, oakbarrel yawps on his tenor sax. Then, something extraordinary happened.

Shepp was known in the ‘60s and ‘70s for his turgid, Afrocentric “fire music,” his trenchant (and often profane) critiques of American racism, and his unforgettable 1965 appearance on John Coltrane’s Ascension. Yet, with a swingin’ backup more suited to the Cotton Club, Shepp popped his sax back in its holder, took the mike, and began to sing Duke Ellington’s “Don’t Get Around Much Anymore,” snapping his fingers, digging in with a deep baritone halfway between blues singer Jimmy Witherspoon and Johnny Hartman. It was the first time all day the crowd got into the act. Then, he did it again with a Billy Strayhorn ballad. (Apparently, he’s been singing a lot in concert lately.) Despite the alternating expressions of joy and horror in the audience, Shepp was actually having fun. He was paying heed to his personal legends—a deft way to deflect the worship of the crowd.

Akinmusire and his trumpet returned for a roiling “Ujaama,” with Shepp showing his DJ skills by peppering his solos with quotes from “Sweet Georgia Brown” and Dizzy Gillespie. Shepp brought everybody “back to the slavery times” when he asked drummer Steve McCraven to come out from behind his kit and demonstrate the ancient “hambone” routine. Then he read poetry. Across the 101 at the Hollywood Bowl, the crowd erupted for Florence + the Machine.

To read the complete review, go to StompBeast.