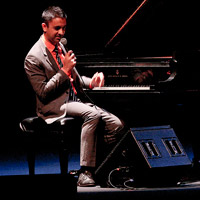 Right before she introduced the Vijay Iyer Trio for Sunday night’s final performance of the 2012 Angel City Jazz Festival, new CAP UCLA artistic director Kristy Edmunds aptly summed up the evening: “It will only ever happen this way once.”

Iyer took the stage looking like the cosmopolitan, Grammy-winning jazz artist that he is. Dressed in a crisp grey suit and bright orange shirt, he’s wiry, youthful (despite the fact that he’s 41), and boiling over with promise. Before beginning the ambitious, 13-song set with an ethereal prologue called “Lude” (as in pre- not quaa-), Iyer acknowledged the crowd with Ellingtonian deference: “I came to listen to you guys, and I hope to hear you out there tonight.”

The trio easily slid into “Accelerado” and the 1970’s funk cover “The Star of the Story,” from Iyer’s latest CD. These are tunes his band has been bending and twisting into varying forms for the last few years. That’s the thing about jazz: you never have to play the same song – even if it is the same song – twice. For “Star of the Story,” Iyer triggered a soft drum loop that allowed his accompanists to slither in and out of the rhythm. Stephan Crump ran tickling hands up and the neck of his bass. Marcus Gilmore unfurled double-time brush strokes that hit as clean as a blast of sea spray.

Deep in concentration like a Los Alamos scientist, Iyer constantly pushed ballroom-like flourishes against the frisky rhythm section. For the anti-ballad “Up on This,” Crump coaxed from his bass the kind of striking, spectral sob that makes audiences want to erupt in applause. No one did, not wanting to destroy the moment. Each of the players took solos, but they didn’t get lost in “improvland,” instead conserving their energy for short bursts.

“Phase Two” began with the appearance of Iyer’s chosen legend for the evening, another New Yorker (not that it matters, right?). Alto saxophonist Steve Coleman, who came up in the late ‘70s and early ‘80s towards the end of New York’s Loft Jazz Scene, looked like he just stepped off the Brooklyn G Line in a t-shirt, khaki jacket, and his trademark backwards baseball cap. Using his particulate sax bleats like a punctuation marks, he bit into Iyer’s “Morphology” and “Habeus Corpus” testing and teasing their creeping melodies. “Passage” was a floating duet between Iyer on a Fender Rhodes electric piano and Graham Hayes on a ghostly, Bitches Brew-inflected flugelhorn.

“Hood,” dedicated to the late Detroit deejay Robert Hood, was the evening’s showstopper. An extended motorik jam drawn out on a one and two-chord progression set by Iyer, it had an insistent and hypnotic repetition. The group – now expanded to a sextet with the addition of Hayes and Herculean-lunged tenor saxophonist Mark Shim – mimicked the electron-pulse of Detroit House while weaving in sound bytes of abstraction. Where else will you hear Sun Ra’s orchestra mating with German industrial band Kraftwerk in Parliament-Funkadelic’s living room? That’s the thing about Iyer: Throughout the whole evening, he never once uttered the word jazz. Welcome to the future.

Read the full review at StompBeast.