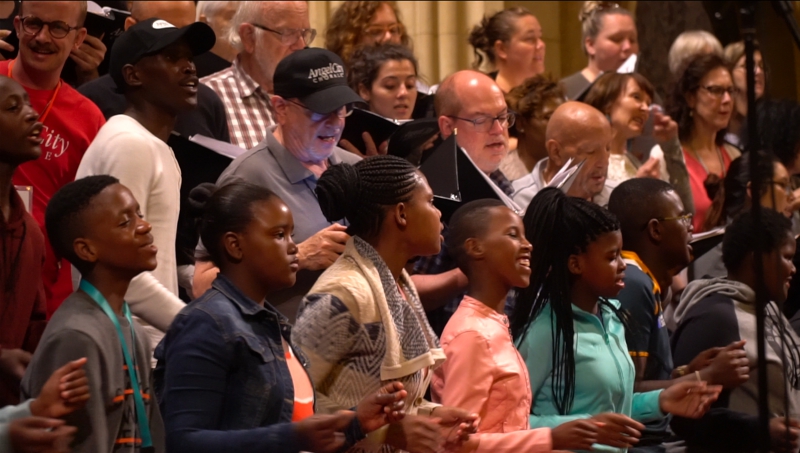 Last weekend, a group of South African tweens and teens in bright green T-shirts exited LAX’s international terminal, formed several loose rows, and began to sing. It was a moment of pure joy in an environment that typically breeds frustration—a moment seven years and 10,000 miles in the making.

In 2011, 80 members of L.A.’s Angel City Chorale traveled to Cape Town, South Africa, as part of a partnership with the Amy Foundation, an organization that sponsors youth programs in the memory of murdered American anti-apartheid activist Amy Biehl. On that journey, the ACC performed with the Amy Foundation’s choir; now the choir has traveled to L.A. for a pair of shows this weekend entitled “One World, Many Voices 2.”

Earlier this week, ACC founder Sue Fink was battling a cold, but couldn’t contain her enthusiasm about having the kids in town. Since their arrival, they’ve had a picnic at the beach, sang at Holman Methodist Church, checked out the California Science Center and USC, and visited Disneyland. All in between rehearsals with the ACC.

Fink founded the ACC at McCabe’s Guitar Shop in Santa Monica in 1993. Back then it had 18 members; 25 years later, it has in its ranks 160 singers of various ages and from a variety of backgrounds. So far, it’s been an eventful 25th anniversary year. Besides hosting the visiting choir, the ACC was chosen to appear on America’s Got Talent (the episode or episodes—they can’t say—should air sometime this month). And they’re still riding a wave of internet fame. Their rendition of Toto’s 1982 hit “Africa” has upward of 10 million views on their YouTube channel alone.

“I like to think of us as the gateway choir,” Fink says. “We aren’t from a religious institution… [and] what we’re singing is the stuff that’s more audience acceptable without being corny. When a lot of choirs do something crowd friendly it can be cheesy. We can be accessible while still being vibrant and alive, and singing music from all over the world.”

Despite the sheer size of the group, the ACC still selects its repertoire via democratic process. That dedication to making music-making a collaborative process has bred a “cohesiveness” Fink says she’s seldom seen or experienced in other groups. And it’s not in spite of the group’s diversity—it’s because of it.

“We’ve realized that we are kind of modeling what we think America should be, and it gives us a sense of purpose. Ordinary people coming together can create something so much better than anyone could do [individually],” Fink says. “We have Republicans sitting next to Democrats at rehearsal. We do better than they do in Washington because we’re working together to create something.”

This weekend program includes a rendition of “A Thousand Beautiful Things” by Annie Lennox, “Samba Do Avião” by Antônio Carlos Jobim, and a brand new work by Grammy Award-winner Christopher Tin. And Toto too.

RELATED: After 35 Years, the Gay Men’s Chorus of L.A. Hits a High Note