Home Art You Can Unlock $10,000 Worth of Cryptocurrency at This Art Exhibition 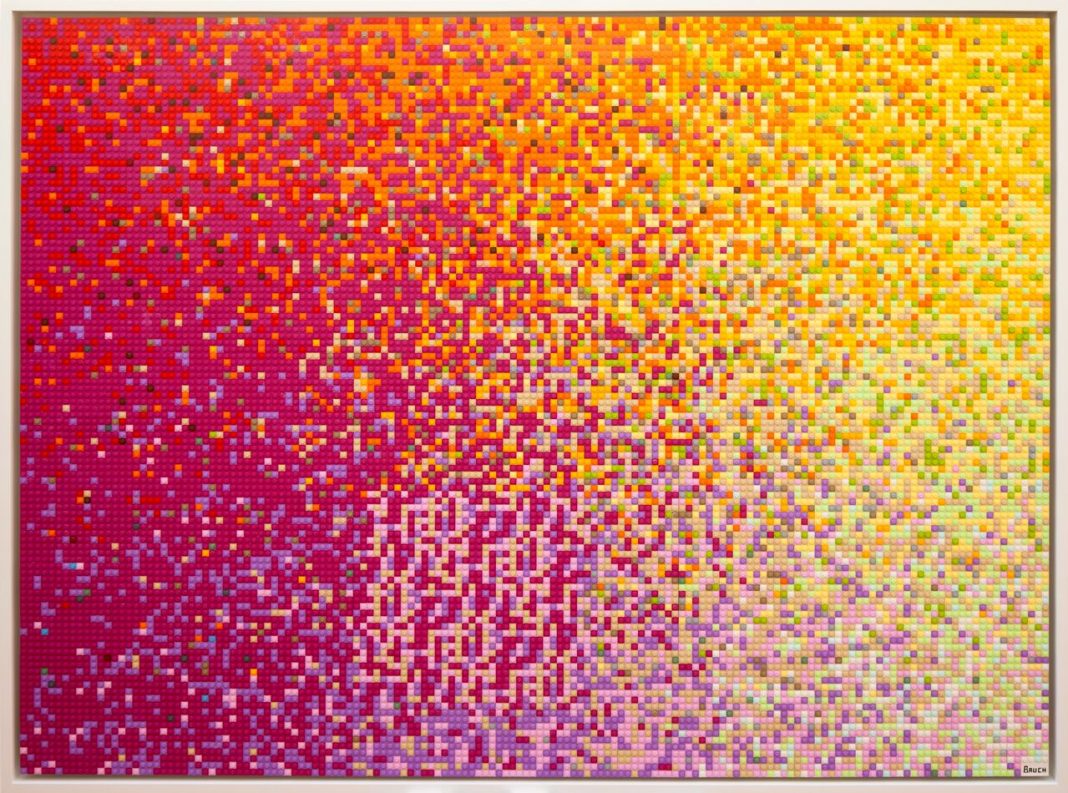 Last weekend, I got a new tattoo. It’s an abstract design, a kind of totem pole made from geometric shapes with an amorphous form positioned near the top that disrupts the symmetry, but somehow keeps the overall balance of the piece. It’s a design that inexplicably “spoke” to me. After the piece was permanently etched into my skin and the initial endorphin rush subsided, I realized that yet again I would have to address the very valid but tiresome question from friends, family, and strangers alike: “Soooo, what does it mean?”

I’ll spare you the details, because this isn’t about my tattoo—or even tattoos at all. But it did leave me wondering about the significance of art and the meanings we attach to physical things. A few days later, I found myself examining the art of Andy Bauch.

The L.A.-based artist employs a signature style of using thousands of Lego bricks to create colorful works that could be best described as pixelated Pointillism. Bauch has been creating these Lego works since 2010 as a way to question the merits and monetary value of art in the technological age, be it through portraits of pop culture icons or mosaics of iconic L.A. restaurants. But his newest series, on display at Castelli Art Space in Mid-City from March 23 through March 25, takes this concept a meta-step further. Titled New Money, the exhibit contains pieces that are actually patterns; if decoded properly, they correspond to cryptocurrency wallet codes. Bauch employed “a combination of human and algorithmic input” to create the patterns and color schemes for each artwork. If that’s the case, the majority of the artistic choices made to create these pieces weren’t choices at all. Instead, the works are byproducts of a highly calculated, controlled system. It leaves one wondering (exactly as Bauch would like to leave one wondering): What exactly determines the value and meaning of art—technical skill, the intention of the artist, or the emotional response we have as viewers? And as someone who is fixated on the impending technological singularity, a natural follow-up question to that would be: Will technology and AI ever be capable of producing true art sans human involvement?

Bauch wants you to question the monetary value of art—who gets to name the price? And if not who, then how is the price being named if there’s no algorithm in place to determine it systematically? Sit on it for more than a second and you’ll realize that his art crosses through a dizzying matrix of cultural, philosophical, and economic realms. It’s enough for a full-blown scholarly paper written by people with acronyms next to their names. Instead, we thought it’d be easier to ask the artist himself, “Soooo, what does it mean?”

The patterns you’re creating are actually cryptocurrency wallet codes, meaning someone could literally cash in if they were able to reverse engineer the works. For someone not well versed in the cryptocurrency world, can you explain how this works?
All you need to take the cryptocurrency stored in a wallet is a “secret key” which is basically just a long password. The works of art are simply a visual representation of those passwords needed to unlock each wallet. The colors and patterns are created with a combination of a cryptocurrency key and a combination of human and algorithmic input.

You’re entrenched in the tech world and have already explored the idea of AI helping you create your art—how do you think these two realms can relate to each other? What can AI bring to the art world and, on the flip side, what will it never be able to achieve that a human can?
Yes, the thing with AI is that it seemingly may be able to relate to just about any realm. But at this point in time “AI” really is just a cobbled-together collection of skills that computers are now good at. For instance, in the last few years there have been breakthroughs improving our ability to recognize objects in images, to process and understand speech and language, and in democratizing these technologies. Oxford and Yale recently polled a bunch of AI researchers, and they think in the next 20 or so years AI can write a best-selling book. I don’t see why AI and robotics won’t be able to paint and sculpt better than artists can in traditional mediums as more AI and robotic abilities are achieved, and there are already many creative applications of AI that can create digital works of visual or audio art. The only catch is that we can’t easily predict when various AI breakthroughs will come. There are still countless tasks which are trivial for humans and nearly impossible for machines.

How do you define creativity? And do you think it’s something AI can ever possess?
I think creativity is a bit of an overrated concept. In the sense that people can produce physical or digital objects, well a computer can do that. And while often times when we think about creativity today we think about originality, basically no work is created in a vacuum. And if a work of art could be truly original then it would be totally unappealing to the majority of people. In the sense that many AI applications employ training models where they are exposed to thousands or millions of examples before they begin operating autonomously “AI creativity” may be the ultimate art appropriator, but I don’t personally think that originality equals creativity, or that creativity makes for great art. But I might just be a little bit cynical.

You’re a developer—when and why did you decide to veer into the art world? And how do these two passions overlap?
I started down this path in 2010. At the time I was struck by an urge to create something physical using the digital skills I’d acquired writing software and manipulating digital media. Now my work in the software field often informs my artwork. In the world of technology many concepts and angles are compelling but have no monetary value, so my art is where I can explore those concepts without needing a good reason, other than wanting to create something I think people should see.

Why did you choose to work with Legos?
I love using Lego bricks as a medium because they are easily wielded as physical pixels. When you put thousands on a canvas they look both computerized and physical. They sit nicely in that gap between humanity and technology. They are artificial, ubiquitous, modular, and mass produced at a rate of 20 million per hour, but then slobbered and chewed on by kids around the world.

Your work questions the value of art and money—why do you personally create art?
I try to make art that bridges the gap between technology and humanity. I’m interested in conveying parts of the digital world which are invisible to most people without technical expertise.

RELATED: This Groundbreaking Exhibit Might Be the Coolest Street Art Show Ever