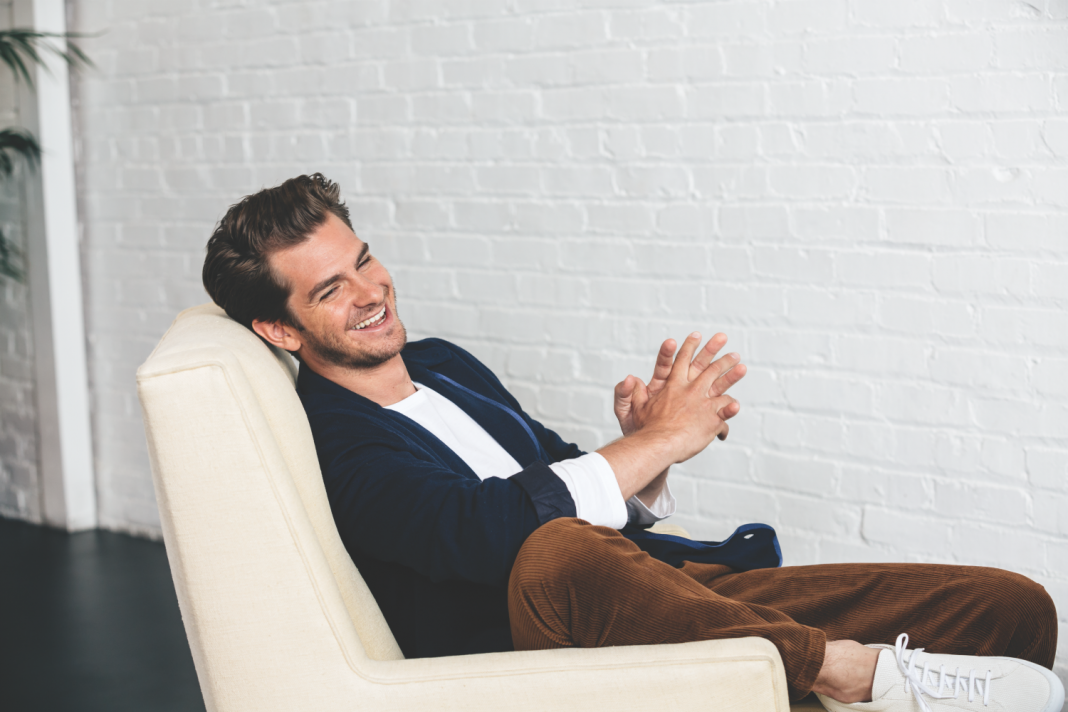 Andrew Garfield is one of those people who’s phenomenal at a lot of stuff. Surfing. Ping-Pong. Imitating a Valley girl with pitch-perfect vocal fry. And, yeah, acting (see an Oscar nom for Hacksaw Ridge, Golden Globe noms for Hacksaw and The Social Network, and a Best Actor Tony for Angels in America).

His excellence in all things would be annoying if it wasn’t so hard-won. The L.A.-born, U.K.-raised 35-year-old immerses himself in study until, eventually, the student becomes the master: To play a Portuguese missionary in Martin Scorsese’s Silence, Garfield spent a year under the tutelage of a Jesuit priest (the training was so thorough that the pope—the pope!—suggested Garfield be ordained). You could say he’d been preparing for Marvel’s Spider-Man reboots since he was three, when he dressed as the web-slinging superhero for Halloween.

He brings the same fervor to the movie Under the Silver Lake (April 19), a genre-bender from It Follows director David Robert Mitchell about a disaffected L.A. artist in search of his missing neighbor. “He’s drifting around the city in that sweaty malaise only L.A. can create in a person,” Garfield says. “He feels like he’s on the trail of some great mystery, which he might well be. It’s totally surreal.” On a recent afternoon, we asked Garfield to dream up some surreal scenarios of his own.

Three Angelenos, dead or alive, you’d recruit for doubles Ping-Pong?
Bowie as my partner—I think he lived in Laurel Canyon. Charles Manson on the
other side with Judy Garland. Bowie and I would win. I’ve set it up that way. I’m very good.

Under the Silver Lake is about cracking codes. L.A. code you want to crack?
Why being in line for Supreme or Milk Bar is cool. People have been brainwashed into thinking that an hourlong line is the new hottest club in L.A.

London has the Tube. Cool nickname you’d give to the L.A. Metro?
Oh, that’s so easy!

Is it?
No! I was hoping something would come to me if I was really confident. You could do a French twist: “La Tube,” like L.A. Tube, you know? No. That’s terrible.

Your idols are Muggsy Bogues, Michael Jackson, and Gandhi. Who’d you run lines with?
Gandhi, 100 percent. He’d dedicate himself to that moment of service with me.

L.A. things you wish London had?
Lack of seasons. Laura Dern. I’d get Kelly Slater to build a wave factory in my backyard. Sushi Park. A Ping-Pong club, but I think someone might have beaten me to it. Still, I want to open something more serious. Because I love Ping-Pong so much.

RELATED: Tony Hale Is Here to Teach You About the Glory of L.A. Malls

Neo-Noir Under the Silver Lake Is a Puzzle of L.A. Locations