Home Uncategorized And the Winners Are… The Real Winners and Losers at the 2013... 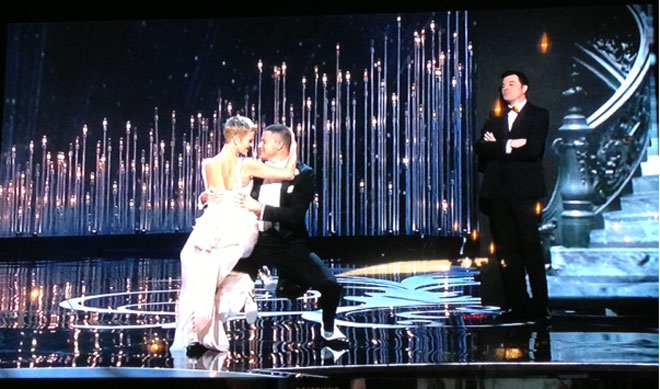 You can’t say Seth MacFarlane doesn’t commit to a bit. At the Oscars telecast he committed to plenty of bits, a few of which were even funny. Others flamed out as spectacularly as the 12-car pileup at Saturday’s Nationwide Race. Veering from powerhouse performances to unfunny (and lengthy) gags, it was one of the most musical — and most schizoid — Academy Awards shows in modern memory. People were waiting for the creator of Family Guy to be controversial when in fact MacFarlane, who looked like a grown-up Peter Brady, was just as hit-and-miss as any other host.

He had a few great jokes at the start, as when he queried Daniel Day-Lewis on his infamously immersive process: “If you bumped into Don Cheadle on the studio lot, did you try to free him?” There were also musical numbers, a sock puppet version of Flight, more musical numbers, rote jokes about the length of the broadcast, and Carson-meets-Kimmel lines like, “I was talking to Jennifer Lawrence today; she told me whether she wins or loses, it’s just an honor Meryl Streep wasn’t nominated.” Below is a list of the real winners.

Best Cameo: Michelle Obama
In her brief video appearance, FLOTUS outshone most of the live presenters and more than a few nominees. Wearing a silver and black gown she looked stunning and had poise to spare. Take notes, Kristen Stewart.

Best Record-Setting Moment — Anticipated (tie): Daniel Day-Lewis wins his third Oscar and Argo wins for Best Picture, becoming only the fourth film in 85 years to win the top honor without also being nominated for Best Directing. The last time this happened was in 1989 with Driving Miss Daisy. Before that, you have to go back to the ’20s and ’30s with Wings and Grand Hotel.

Best Record-Setting Moment — Unanticipated: For only the sixth time in the history of the Academy Awards, there was a tie — and it was the first tie in the sound editing category. (See Best Hair, above)

And now, the official winners: