Home Uncategorized An American in Concert: Bill Callahan in Europe 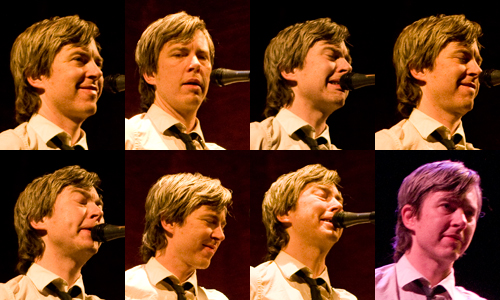 My housemate often makes fun of me for listening to folk music; he calls it “unjoyful.” He plays (good) hip-hop loudly in his room, and quietly changes our iPods when we use the communal speakers. I took to listening to my music with headphones—especially since more often than not, I’m listening to Bill Callahan.

I admit that he’s right; the music I listen to isn’t viscerally joyful—the slow rhythms make me want to take a stroll outside, not bolt out the door dancing—but listening to Bill Callahan brings me immense joy that’s almost too difficult to describe.

I mean, yes, his latest album, Sometimes I Wish We Were an Eagle, is some of the most depressing shit I’ve heard in ages. I need only to wait until the end of “Too Many Birds,” when he finally completes the phrase, “if you could only stop your heartbeat for one heartbeat,” to feel the same desperation to stop time. It’s the same desperation I felt the day before I left for France, where I am today.

So when I sheepishly brought up my plans to hitch rides to two cities in France and Spain to see Bill Callahan, my housemate and everyone else who’d heard the music blasting from my room was polite but baffled. Mostly I just told people I was going to travel Europe, and left it at that.

I left Los Angeles to live in Grenoble, France, a ski town in the French Alps where MC Hammer pants and reggae are popular. I don’t ski, I’m too clumsy to wear pants that emulate being in a three-legged race, and I hate reggae. So why am I here? Because I’d been chasing a dream to live in France since I studied in Paris for a semester in college. I came to redeem myself for having only minored in French, to prove to myself that, with enough training, I can speak another language fluently—that I, Cara, could exist in another language. I came because I couldn’t find fulfilling employment in California. I thought, what the hell, let’s do something unfulfilling (teach English) in a different country.

I don’t regret my choice, but I applaud France for trying its damndest to make me. I have encountered so many problems with French bureaucracy that after five months of living here I still have no health insurance. Just the other day, I politely ordered a baguette from the boulangerie and the woman helping me whispered to the cashier, “American.” I still have trouble telling a story in the past tense, and never mind the future. It’s becoming increasingly clear to me that I have none here.

I continued my stay in France, dipping into my American savings just to get bills paid, missing my friends back home, unable to get through an entire conversation with a French person without being corrected. “You should hear me in English,” I told my French housemate. Except for him it was probably more like, “You must to listen me to speak the English.” Winter came late and strong, and because my package of winter clothes got sent back after being stuck in French customs in Paris for two weeks, I stayed home a lot. Lit a lot of candles. Wore a lot of t-shirts all at once. Back in September, I needed a break from California. By February, I needed a break from Grenoble.

Los Angeles is a stopping point for any musician on a U.S. tour, and because so many artists pass through, the city has become a concert factory. It’s for this reason that some of the enchantment is removed from the concert experience; there’s rarely the sense of “discovering” an artist after fighting for a parking space and standing in a line of people trying to impress each other with their musical knowledge (this, by the way, is mainly how I learn stuff about music). Even places that claim to be hidden aren’t really; when there is a will (or, in Koreatown’s R Bar’s case, a MySpace that posts a “secret password” for access to performances), there’s a way. In Los Angeles, it is difficult for concerts to feel personal.

I didn’t circle a neighborhood for half an hour trying to find a parking space to see Bill Callahan last month. Instead I hitched a ride with Forest Casey, who came to visit me and to take photos of the event, and a stranger with a car five hours from Grenoble to Toulouse to see him. The ride and the price of renting a place to stay for the night cost more than we had intended to spend, and we were exhausted from the car ride and frustrated trying to orient ourselves in Toulouse. But Bill Callahan’s dry humor and deadpan wisdom lulled me through a harsh Grenoble winter (“winter weather is not my friend”), and I was determined to see him. Yes, this was personal.

The Garonne Theatre had room for about 20 cars in its parking lot and stood alone near a river. It seems, in my mind, to be the only building floating in light against darkness of Toulouse, this despite the fact that it was Saturday night. I entered the room, and noted that hipsters look the same everywhere in the world. There were coiffed and beautifully dressed women with plaided and scruffy men. Most of them were holding sheets of paper—primers on Bill Callahan, which included an extensive musical biography and translations of an interview and of “Rock Bottom Riser,” which he performs often at concerts. The translation was accurate at least, but, as with the subtitles in Hamlet, failed to capture the beauty of the lyrics; je me suis tiré au fond is just what a rock bottom riser does in a river, but the translation misses the metaphorical meaning of being a rock bottom. Perhaps this is impossible to do in a short translation. Perhaps finding the French equivalent isn’t worth the trouble.

The theater was full, well over its 250 seat capacity, and yet there was hardly a peep from the audience. Callahan was already frustrated with the sound quality (he wanted more sound from Neal Morgan’s drums), and informed the audience he had a cold, had taken medicine for it. (It made him “happy and sad at the same time.” My heart leapt.) The lack of energy from the otherwise polite audience probably didn’t help. He maintained a sort of “the hell with it” attitude throughout the set, which became especially apparent when he chopped through “Say Valley Maker,” where the drums were essential to the climax of the song: he proclaims, “bury me in water, / and I will geyser / bury me in fire, / and I’m gonna phoenix,” and cue the gradual explosion of music.

I sat on the stage itself, as there was no separation between it and the floor, and the stadium seats and the steps leading to them were filled. No one objected to how close those of us on stage were, and because of my proximity to him, I felt as if I was watching a private performance. I could have sworn he even looked in my direction a couple of times. But it wasn’t only private in that respect; it felt as if he stopped caring about the audience because they could have just as easily not been there.

Forest and I caught another ride to Barcelona to see him two nights later. The crowd was much different than the one in Toulouse. They seemed familiar with his work, singing and dancing along, applauding during guitar solos (I can only guess that this is because Barcelona is a much larger, more metropolitan city than Toulouse). Quite a few people gathered by the sound board, which was far from the stage, but where, apparently, the sound quality was best. They shushed any chatter that arose during instrumentals. And although the most personal Callahan ever got with the crowd was to answer an audience member’s heckle with a simple “Huh?”, he did spice up his setlist, adding songs like “Teenage Spaceship” and ending with one of my favorites, “The Well”—a song that begins with a frustration about the inability to work, a concept I relate to nearly and dearly. In that way, it was also personal.

The concerts didn’t make me yearn to be back in Los Angeles, but they made me miss America. Callahan’s music is rooted in themes that are universal and landscapes that are distinctly American. He could muster neither a “merci” nor a “gracias” for either of the shows, choosing to dole out a “thank you” here and there (and a straight-faced “no smoking” to the Barcelona crowd). It was a wonderful way to kick off my own small tour of Europe, and to mark the beginning of the end of my time in France: with the images of sycamore, rivers, horses, and a man with a guitar whose music tugs my heartstrings back home, whose lyrics echo through my emptied spirit in perfect American English.