Accessorizing in the world of hip-hop has always been about spurning convention for sparkly street art you could wear. Never have diamonds been so ice-cold, so plentiful, crusting over rings and watch faces in a fury of flex. The artists and artisans who both inspired these creations and were inspired by them are the subjects of a remarkable retrospective, Ice Cold: A Hip-Hop Jewelry History (Taschen).

With cred-lending text by Slick Rick, A$AP Ferg, LL Cool J, Kevin “Coach K” Lee and Pierre “P” Thomas, the book is an overdue chronicle of hip-hop’s aesthetic relevance beyond its beats and rhymes. As Slick Rick (aka Ricky Walters) points out in the forward: “Every culture celebrates its creative contributions in its own ways. Black culture goes above and beyond. Going big is just how we roll. This is true of our music, our dance, our sense of fashion . . . and our jewelry.”

From Godfather To Son. Eric Lynn Wright, better known as Eazy-E, put in the work turning West Coast flow into an international cultural phenomenon by founding Ruthless Records and leading N.W.A, which included future stars Ice Cube and Dr. Dre. N.W.A’s 1988 debut album, Straight Outta Compton, was an instant worldwide smash and one of gangsta rap’s defining artifacts. Eazy died at 30, in 1995. His son, Lil Eazy-E, holds a pendant depiction of his father by Benn Baller of IF & Co.

Big Biz-Ness. In the late 1980s, a young Biz Markie walked into the New York Diamond District shop of Jacob “Jacob the Jeweler” Arabo of Jacob & Co. and requested a signature piece of jewelry that would become the “Biz” ring. Biz was Jacob’s first client from the hip-hop world, launching a legendary run of design collaborations between Jacob and a long list of other artists in the genre.

Solid Gold. A pioneer in hip-hop jewelry, Slick Rick created the draped-in-gold look that became a classic of the 1980s. The New York-based Anglo-American MC popularized the large dookie rope chain while also adorning himself with crowns, scepters, and other motifs that became synonymous with hip-hop jewelry.

Far-Out East. Favored by high-profile rappers from Notorious B.I.G. to Pharrell and A$AP Rocky, Japanese fashion legend Nigo’s jewelry collection includes a nameplate belt, diamond ring, and set of three BAPE (A Bathing Ape) heads by Jacob & Co. Nigo’s love for the 1968 film Planet of the Apes served as the inspiration for the BAPE logo, as well as referencing the Japanese idiom “a bathing ape in lukewarm water.” 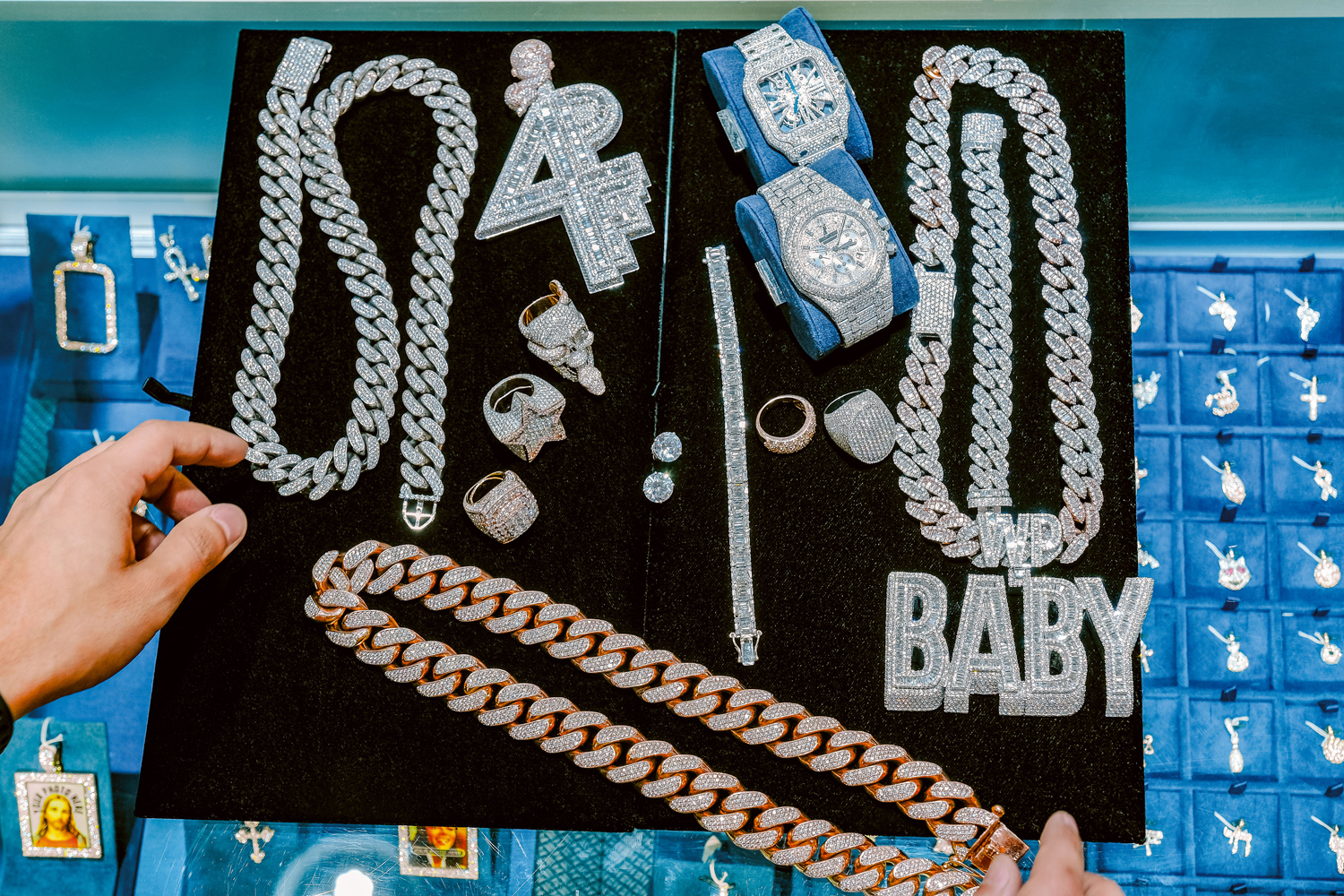 LAPD Bling Alert: Curb Your Jewelry Habit to Avoid Getting Robbed This Spring

How I Got This Look: Hospitality Maven Patti Röckenwagner Dissects Her Colorful Style