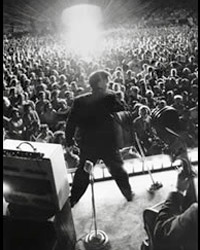 John Lennon once said that before Elvis, there was nothing. Indeed, no one that came before Elvis was like him—the round dark eyes, the full sensuous mouth, the deep, soulful voice. On two occasions in 1956, photojournalist Alfred Wertheimer snapped photographs of Elvis Presley, singer, 21 years of age.

Elvis at 21, Photographs by Alfred Wertheimer, the touring photography exhibit that just left the Grammy Museum (and references that Lennon quote on its Web site), offers an intimate look into Presley’s musical and personal lives. The photos are both loud and quiet, capturing the fury of Elvis onstage and moments when he sat alone, playing on a piano in the corner of an empty room. Wertheimer captured a tipping point in the rock star’s life: in the late spring of 1956 he had made it big enough to receive fan mail (he had told one fan in a letter that he couldn’t love her but that they could be friends) but could sit at a lunch counter, waiting for a hamburger, without being mobbed.

With one shot, Wertheimer caught Elvis in a leap, both feet off the floor, his body angled away from the camera and toward the screaming audience. He’s in the heat of the moment, mouth open, singing loudly while shaking his body to the groove of the music. Maybe it’s this same electric energy that made Elvis irresistible to women (and why, as an exhibition display explains, “conservative critics called Elvis a disciple of the devil”). Four photographs taken consecutively show Presley meeting a woman, taking her into a corner, and them kissing passionately. Wertheimer said it was typical for the singer to sit in a diner, talk with an attractive waitress, and leave 20 minutes later with his arm around her waist.

Other photographs reveal the mellower, more normal aspects of Elvis’ life; he’s shown splashing in a pool, grinning like a boy, his slicked back pompadour a mussed-up mess. And yet, Wertheimer’s most illuminating shot shows The King in a recording booth, his upper lip turned up in that famous snarl. There’s no audience. No one to seduce. He’s simply singing into a microphone, curling his mouth in service of his voice.

Elvis at 21 will continue touring the country at different museums into 2013. Photographs courtesy sites.si.edu