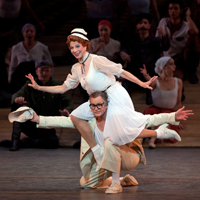 To read the program notes for choreographer Alexei Ratmansky’s The Bright Stream is enough to make your head spin. We learn that characters take on disguises, couples swap partners, and the plot is all rampant confusion. When American Ballet Theatre brought the program to life at the Music Center last Thursday through Sunday, there was no denying the dizzying vibe. But as the story unfolded onstage, the company showed us that maybe it’s not so crazy to pair classical technique with slapstick comedy. In the end, ABT surprised the audience with a smart tale of mistaken identity and true love.

The story is set on a Soviet farm collective during an autumn harvest festival. The principals on opening night were Paloma Herrera (Zina, an amusements organizer and avid reader); Marcelo Gomes (Pyotr, her husband); Gillian Murphy (Ballerina, who danced with Zina years before); and Cory Stearns (Ballet Dancer, who partners the Ballerina and ultimately gets huge laughs in a scene of cross-dressing). Also among this motley crew were an accordion player, an old dacha dweller and his wife, a tractor driver, field-workers, an inspector, a schoolgirl, and a milkmaid (performed by soloist Misty Copeland, who hails from San Pedro).

The pace of Act 1 was so swift, the story was somewhat hard to follow. Groups of dancers would perform center stage, one after the next, overlapping with others who were just moving off to the sides. This jumble didn’t allow for a clear view of the action. If you looked right, you’d miss a crucial bit of pantomime happening to the left. But by Act 2, the frenzied footwork slowed and what remained was fluid, precise dancing—whether in a traditional pas de deux (Zina and Pyotr) or in hilarious scenes of seduction (the Ballerina disguised as Pyotr wooing the dacha dweller’s wife, the Ballet Dancer disguised as the Ballerina being wooed by the dacha dweller). These moments, both understated and exaggerated, were beautifully juxtaposed. Herrera treated us to difficult pirouettes and Murphy to long-legged extensions; Gomes exhibited his usual power and strength and Stearns a youthful lightness.

Then there were other elements—a bicycle, a dog, a shotgun, a gramophone, a tractor made of human limbs—that combined to form a unique performance experience. Unlike other ballets (The Nutcracker, say), whose every step can seem familiar from overexposure, this production brought a fresh sense of fun. Finally all is disclosed, the right lovers reunite, and it appears that the characters find themselves on the verge of a new adventure: crossing the Atlantic (i.e. the Bright Stream) for America. We wish them well.