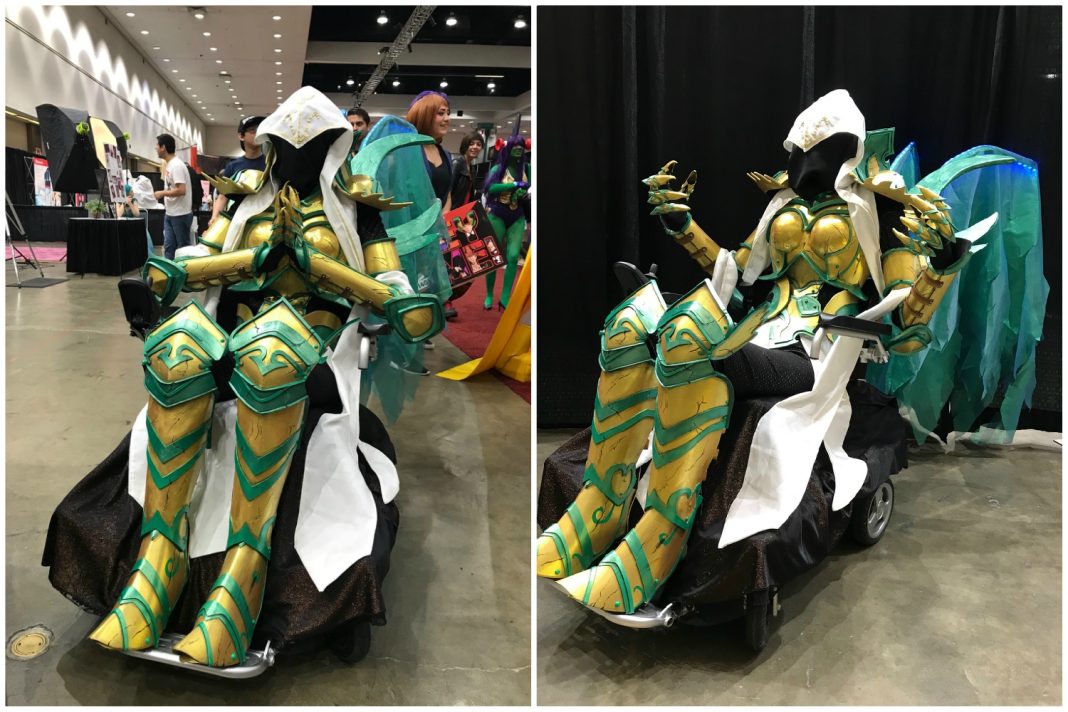 Wearing golden armor, a white hood, and a black shroud completely covering her face, Amber Kohaku Chan wends her way around the crowded convention floor at L.A.’s Anime Expo with aplomb. Her costume, a stunningly detailed take on Auriel from the Diablo video game franchise, gives the illusion that she’s floating around the room, when in reality she’s seated in an electric wheelchair.

“I like incorporating my chair into my cosplay,” Chan says. “I have more drive to do something bigger or better or to really push myself. Because it’s hard for me to do just regular stuff. I think that drive helped me to push through big long cosplay builds that take months at a time.”

Chan (nee Guzman) is a professional cosplayer with muscular dystrophy. And while for many of her colleagues, assuming the mantle of a character is just a hobby, for her it’s a lifestyle. She identifies as a Living Doll, a member of a community where women and men don specific clothing and make up to assume the appearance of various dolls, ranging from traditional Japanese porcelain dolls to Ken and Barbies.

“I’ve always loved playing with Barbie. I grew up in the ’90s and Barbie was everything,” Chan gushes. Although she’s in her 30s, she speaks in a charming middle school-like cadence, sprinkling her sentences with girlish giggles. “It wasn’t until I was older and I got into Youtube, I found Venus Angelic. She would make videos on how she would dress up as a doll, and that really inspired me to get into Japanese fashion and that dolly style she did so well.”

When it comes to fashion, Chan often evokes the Lolita aesthetic, a Japanese subculture influenced by Edwardian, Victorian, and Rococo styles with an emphasis on cuteness.

“Lolita style is a part of cosplay. There were plenty of girls walking around AE this year in Lolita fashion. That really plays into the dolly style. That was my first cosplay. I had a beautiful headdress and a gown that was Lolita fashion. Japanese style and anime are always going to be close together.”

Even within the Living Doll niche, Chan is a unique figure. Her ailment, marked by a progressive weakening of a person’s musculature, has become directly connected to her lifestyle. “I have to be picked up and set down, getting dressed and undressed, just like a doll,” she says. “I love putting that fashion sense with my illness.”

Despite Chan’s positive relationship with her physical condition, it does affect aspects of her cosplay, specifically creating a challenge out of a simple act most take for granted: standing up. “People want to see your full costume,” she says. “When you’re sitting down it’s difficult to show off all the work you’ve done. I still like going all out.” The Auriel costume at Anime Expo is one example of how the clever cosplayer has turned her muscular dystrophy into an advantage.

But her influence goes beyond cosplay culture. In an image-obsessed city like Los Angeles, Chan’s appearance challenges the established standards of traditional beauty. “People do look at me differently because I don’t look like one of those Beverly Hills or Instagram girls that you see. But I think that makes me more unique and that’s what gets me a little more attention, perhaps in a positive way. Because I’m representing a different style that’s out of the box and the norm that you see all over the place.”

As a public figure (she has upward of 65k Instagram followers), Chan also represents another community: those with disabilities. According to a 2015 report from the National Institute on Disability, Independent Living, and Rehabilitation Research, over 900,000 people living in Los Angeles county identified as disabled. Having public role models visibly thriving despite their disabilities, or arguably because of their disabilities, helps normalize their conditions both within and outside of their communities. And, despite the many challenges those in wheelchairs have to face while traversing through public forums, Chan is happy to see other disabled people navigating crowded public spaces like Anime Expo.

“I’ve been going to this expo for years. This year, there were so much more people with disabilities. It’s really nice to see more and more people like that get out to these huge events where it’s really hard to get through these crowds, but they still come out. It’s really awesome.”