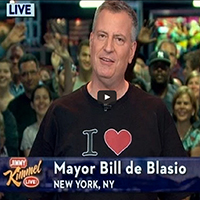 While Kimmel and an apologetic Garcetti watched in satisfaction (victory tastes sweeter when it’s sung) de Blasio, backed by the kids of the 52nd Street Project, sang those famous words: “Roll down the window, Put back the top, Crank up the Beach Boys, baby, Don’t let the music stop.”

“I Love L.A.” was penned by Randy Newman in 1983 and since then it has been our city’s unofficial anthem. If you’ve been to a Dodgers, Lakers, Galaxy or Kings home game, you’ve heard it. If you’ve walked into a supermarket or turned on a car radio anywhere in Southern California, you’ve heard it. Nike even used the song in an ad that ran during the 1984 Summer Olympics.

We love “I Love L.A.” as much as the next Runyon Canyon-hiking, CicLAvia-riding, Venice Beach-rollerblading Angeleno. But after three decades, maybe it’s time for the city to consider a new anthem. A few suggestions…

“To Live and Die in L.A.” – 2Pac
Despite some of the grim references both the videoand the lyrics are full of celebratory references to the city from the Baldwin Hills Crenshaw Plaza to the lowriders, the churches, the billboards, and the people.

“Under the Bridge” – Red Hot Chili Peppers
Sure, it’s kind of obvious, but if we have to listen to tormented bros rap-singing about the pain of existence, these are the words we want to hear: “At least I have her love, The city she loves me, Lonely as I am, Together we cry.”

“The Only Place” – Best Coast
Known for short, sunny surf-pop ditties tinged with millennial angst Best Coast’s 2:40 ditty points out, “We’ve got the ocean, got the babes, Got the sun, we’ve got the waves.” Indeed, why would you live anywhere else?

“City of Angels” – Thirty Seconds to Mars
Penned by Jared Leto and performed by his band, this song is a lengthy love letter to Los Angeles with an epic music video that features Kanye West, Lindsay Lohan, James Franco, a slew of other celebs, and several street performers talking about why they love the city and the struggle to succeed here.

“It Was A Good Day” – Ice Cube
The 1993 song doesn’t have L.A. in the title but it does have tons of great references including basketball, pagers, Fatburger, the Goodyear blimp, and the Lakers beating the Supersonics.

“Join Me in L.A.” – Warren Zevon
The penultimate track on the acerbic rocker’s self-titled 1976 album has few lyrics but the opening lines say it all: “Well, they say this place is evil, That ain’t why I stay, ‘Cause I found something, That will never be nothing.”

“Los Angeles” – X
Though the song is all about leaving the city due to disillusionment, it rocks. And it was written by one of the L.A.’s great homegrown punk acts.

“L.A.” – The Fall
The song by a British post-punk band isn’t terribly singable but the video for the largely instrumental track is a great slice of MTV from the 80s.

“Los Angeles” – Frank Black
It’s all about the chorus and the way Black pronounces Los Angeles with a hard “g.”

“Big Dumb Town” – Stan Ridgway
A native of Barstow, the singer-songwriter best known as the lead singer of Wall of Voodoo (“Mexican Radio,” anyone?) has a head for sunshine and noir. This song off his 1995 album Black Diamond marries a new wave hook with western twang.

“Los Angeles, I’m Yours” – The Decemberists
Filled with uncommon adjectives to delight the twee Angeleno, this song would win Best Backhanded Complement thanks to lines like, “And as it tells its sorry tale, In harrowing detail, Its hollowness will haunt you.”

“California Gurls” – Katy Perry
You don’t want to admit that you like it but you do. And thanks to your 5-year-old niece you know all the lyrics. Maybe gift shops can start selling whipped cream bras.

THROWBACK BONUS: “L.A. My Kinda Place” – Barry White
The deep-voiced soul singer goes higher and more breathy for this upbeat ode to the city. You can tell it comes from another era because he name-checks the Rams and Raiders, but his love for the city runs deep.