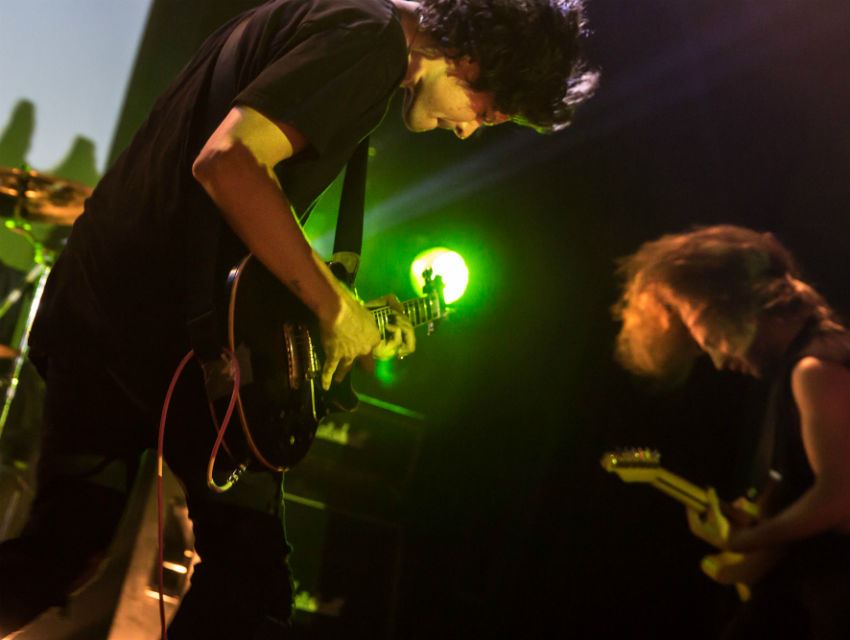 For bands ahead of their time, death can be the catalyst for rebirth. ALOKE, a melodic post-grunge outfit fronted by Christian Zucconi of Grouplove, celebrated the release of its second record, Alive, Friday night at the Echoplex. This short run of shows is the first time the band has played in seven years.

Zucconi’s Grouplove bandmates—Andrew Wessen, Ryan Rabin, Daniel Gleason and soon-to-be-wife Hannah Hooper—all came out to support ALOKE, a group of high-school friends who first recorded in the early 2000s. Back then, an unsigned, unmanaged ALOKE sought out iconic Nirvana producer Steve Albini, and he invited them to record in his Chicago home. They honed material, released it, and gigged nonstop—neither the industry nor the press bit. They faced the harsh truth that they simply didn’t have the money to keep it up much longer.

That’s about the time Zucconi met Hooper. She invited him to an artist’s retreat in Greece, where they met the guys who would eventually round out Grouplove, a band that found commercial success relatively quickly.

“I’ve been busy the last few years with Grouplove suddenly and unexpectedly taking off, but for the first time in about four years, we’ve been able to slow down,” Zucconi says before the show. Almost on cue, a Grouplove fan walks up and timidly offers him a bright orange drink. “We knew [Alive] would see the light of day; we just didn’t know when. We wanted it to make sense.”

ALOKE (pronounced like “alone” with a K) is the name of a close friend with whom the band grew up. “It means ‘invisible,’” Zucconi says. “And when we’re not together as a band, it can feel that way. But when we do come together, it’s this crazy thing.”

Hooper, an artist who designed ALOKE’s album artwork and posters, still calls them her favorite band; it’s how she met Zucconi, with whom she’s expecting a child next month. In fact, songs that we associate with Grouplove now were originally ALOKE material with darker leanings, developed by Zucconi, Hooper, and DeCourcey after the former two returned from Greece. ALOKE’s “The Colors You Have” became Grouplove’s “Colours,” while “Itchin’ on a Photograph,” “Naked Kids,” and “Gold Coast” also got the Grouplove treatment for their Grouplove EP and successful debut album, Never Trust A Happy Song.

But any Grouplove fans in attendance soon found out that ALOKE’s sound is distinctly its own. One part Pixies, another part Nirvana wrapped in an earnest garage aesthetic, the only real element tying ALOKE to Grouplove is Zucconi’s recognizable vocal style.

What’s more, the band reenlisted Albini (Nirvana’s In Utero, Pixies, PJ Harvey), who brought elements of the ALOKE’s alt rock and grunge influences to fruition. “The man knows what he likes and what he doesn’t like, and that’s refreshing,” Walker says. “He’ll give it to you straight, and that’s what we were craving.” The resulting album Alive is a beautiful mix of caustic riffs, threadbare emotion and hopeful dissonance. Brought to the stage, ALOKE truly comes alive.