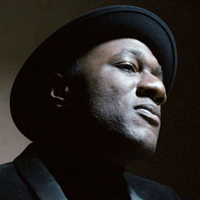 As of yesterday, you could take a mini-tour of the legendary Park Plaza Hotel in MacArthur Park without getting off the couch. Aloe Blacc’s newly released interactive music video for “Love is the Answer” lets viewers follow four people through four different journeys through the hotel: sashaying through the ballroom, jamming on the roof, sneaking in through the kitchen, and stampeding down the grand staircase.

It’s an appropriate backdrop for the video because of the hotel’s history and Aloe Blacc’s. Both have been on the L.A. scene for quite a while: the 35-year-old singer/songwriter grew up in Orange County, influenced by the big-name hip hop events he paid “pennies” to see as a high schooler. He put out two records before gaining international success by teaming up with Avicii to create the country-tinged 2013 hit “Wake Me Up.” (Look for him at Coachella this year.)

The Park Plaza was built in 1926 in what was then a glamorous neighborhood during the Jazz Age. Sporting a long, pinstriped jacket and shined leather shoes Blacc pays homage to the era with his sartorial choices. In the ’30s, the building hosted Olympic swimming events and in the ’80s it was named L.A. County’s 267th monument, but the surrounding area has also been plagued by crime and gang violence.

While Blacc has been working with producers like Pharrell Williams and shifting his style from hip-hop to soul, the Park Plaza is dusting off its classic brand of luxury as MacAthur Park undergoes something of a revitalization. It could be argued that both Southern California natives who are both getting their dues.

Lincoln Motors provided funding and the sweet little ride (the 2014 MKZ) featured at the end of the video. When asked how the three were connected—the hotel, the car, and the talent—Blacc said, “The words that come to mind are ‘modern classic.’ We all reflect this nostalgic Hollywood that has stepped into the future.”

In the video above you’ll see the director’s cut, which combines the four stories, but for the full interactive experience, go here.