Home Uncategorized All That (Classical) Jazz 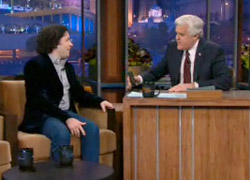 Getting to the Hollywood Bowl on a Saturday or a Sunday is one thing. Getting there on a Tuesday is quite another. Last night I battled the after work traffic on Highland Ave. to hear the Los Angeles Philharmonic play Gershwin and Bernstein (George and Leonard, that is), and traffic won; I entered the bowl right after the program began, just in time to have to stand at the bottom of my aisle until the 23-minute selection of music from West Side Story was over. But I was happy to.

LAPhil director Gustavo Dudamel has already been recognized by the classical world as one of the great conductors of our time. He’s also a great performer. Baton in hand and dark, tight curls dancing around his face, Dudamel conducted the orchestra with his whole body; the notes seemed to bubble up from inside him, reaching full expression with an eyebrow lift here and a side-jerk there.

I was back on my feet (albeit at my seat) at the end of Gershwin’s Rhapsody in Blue, which featured pianist Gabriela Montero and received a standing ovation from the crowd. The American classic started off jazzy and cool with that famous wail from the clarinet, gained steam as its catchy, expansive melody set in, and ended in a short, joyous sweep.

Montero kept the crowd rapt from there, first with an impressive improvised piano solo and then with two shorter improvisations inspired by musical themes suggested by the orchestra and audience (Beethoven’s 5th Symphony and “Guantanamera,” respectively).

The program closed with three dance episodes from On the Town and music from An American in Paris. The Bowl will host a second tribute to Gershwin later this month when a group of pop and jazz artists including Jason Mraz and Monica Mancini perform “Gershwin Across America” on August 25. Yes, it’s a Wednesday night—and the LAPhil and Dudamel are not a part of the program—but I’d expect it to be equally worth the rush.