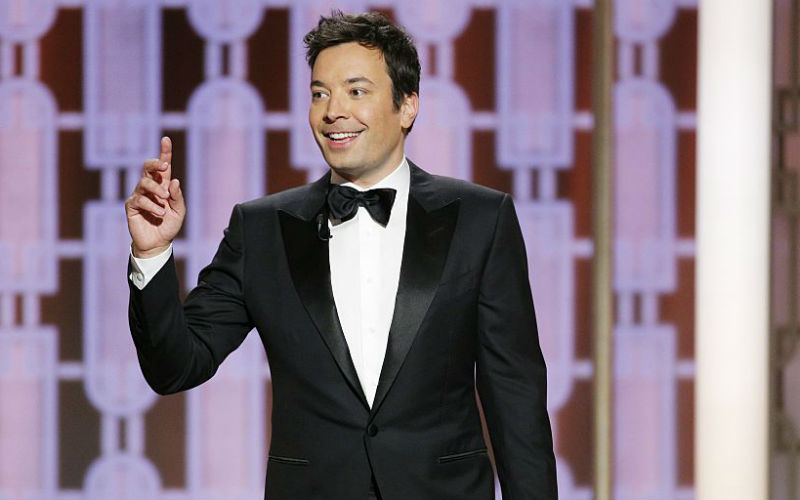 The La La Land Intro That Was, Arguably, Better Than La La Land

You know that part in 10 Things I Hate About You where Chastity goes, “I know you can be underwhelmed and you can be overwhelmed, but can you ever just be whelmed?” This isn’t the popular opinion (especially after tonight’s awards), but I was only whelmed by La La Land. The intro to the Globes, however—which recreated the opening number from Damien Chazelle’s critically lauded film, and a few other songs, too—was genius. Littered with cameos and winks to a great year of television and film (a tribute to Stranger Things hero Barb, Kit Harington’s is-he-or-isn’t-he-dead plot line from Game of Thrones, some extra perfectly executing Broadway-style moves while clad in the Deadpool suit), this is the version of La La Land that deserves an Oscar.

Thank goodness the dude has a background in improv, because when a teleprompter snafu halted Jimmy Fallon’s opening monologue for about a minute—approx. an eon in live TV time—he recovered gracefully (and even generously provided us with a self-deprecating GIF).

Why yes, I did have to tweet about this myself so I could embed it here, because I’d like to think I’m in the one percent of nerds who even noticed this Hamilton ref. The face—possibly of a man who’s wondering how much longer this show is—that will surely launch 1,000 GIFs. Oh wait, it already has.

The Parade of Embellished Dresses

There were a few trends that stood out on the Globes red carpet (plunging necklines, aggressive shades of yellow), but none more so than an onslaught of intense embellishments. We’re talking draped beading (hey, Gina Rodriguez), sumptuous brocade (OK Kerry Washington!), shimmering appliqués (Emma Stone’s star gown is so apropos considering La La Land‘s many wins), and, my personal favorite, metallic gilded pockets (I see you, Blake Lively). I’d also like to call attention to Donald Glover’s brown velvet suit, which isn’t an embellished dress, but I make the rules here so cool it.

Dresses aren’t the only way for women to adhere to a black tie dress code. Evan Rachel Wood showed up to the Globes in an Altuzarra tuxedo, a fashion choice that carried a little extra weight for her: “This is my third nomination,” Wood said on the red carpet. “I’ve been to the Globes six times. I’ve worn a dress every time. And I love dresses. I’m not trying to protest dresses. But I want to make sure that young girls and women know they aren’t a requirement and that you don’t have to wear one if you don’t want to. Just be yourself, because your worth is more than that.” Preach.

Fact: every award show would be at least 47 percent more entertaining if the writer who came up with this presenter bit came up with every presenter bit. In fairness to Kristen Wiig, though, she has a history of bringing the giggles to her Golden Globes bits regardless of her presenting partner, so maybe the real solution to better awards shows is just giving her a mic and free reign.

Do you see it?

Parker showed up to the Globes in a dress—and with a hairstyle—that gave off some Princess Leia vibes. “I didn’t mean for that!” she said on the red carpet, but intentional or not, it’s kind of the best.

Meryl Streep speaking the truth! If there was an award for best speech she would win #GoldenGlobes pic.twitter.com/5Q5ibPQdXd

Hollywood Brief: What Denzel Washington Is Up to Next; Awards Race (So Far)