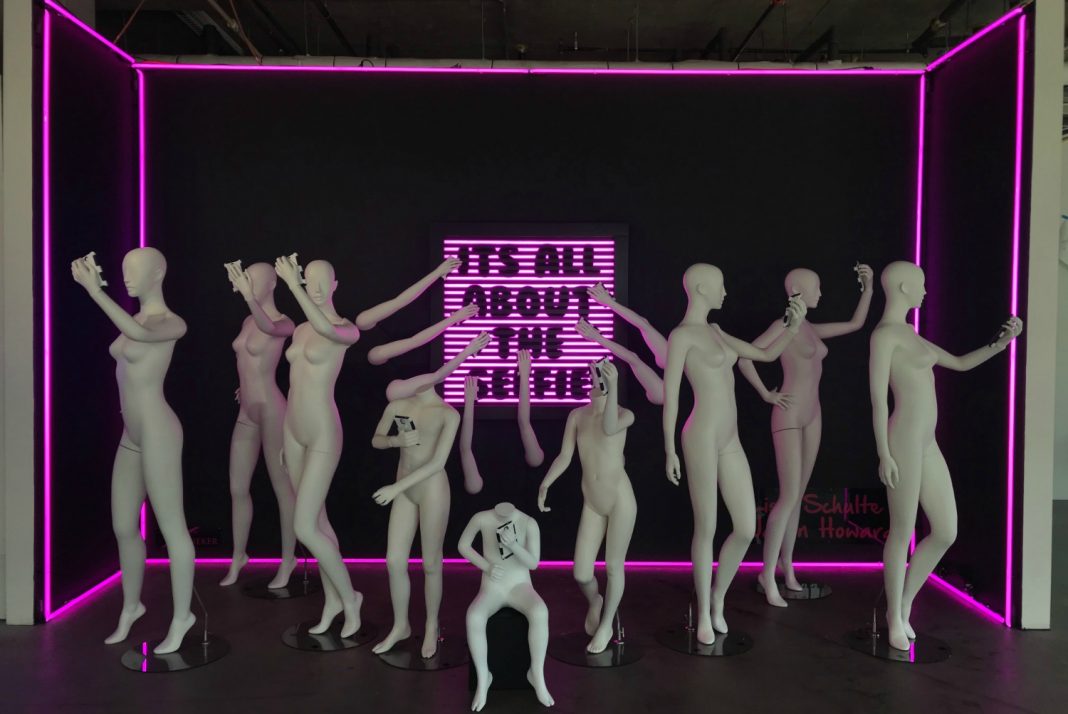 Near the entrance to Chinatown’s Eastern Projects gallery, neon artist Lisa Schulte and set designer Jason Howard have installed a work that skewers our preoccupation with plastering ourselves all over social media. A bunch of faceless and headless mannequins pose with their backs to a neon sign that reads, in big black bubble letters, “It’s all about the selfie.” Each anthropomorphic figure clutches a handheld device aimed at her face, and each individual screen displays a selfie taken from that mannequin’s perspective.

“Everyone is recording their life experience so often and without a pause,” Howard observes. “They’re not even present. They might as well not even be there. There’s going to be no memory of that. They’ll have a photo and think, ‘Where was I? Who was I with?'” Schulte, who currently has a neon billboard on display at Grand Central Market, says she’s observed people absent-mindedly backing into the work’s delicate glass tubes in an effort to get the best shot. Instagram can be a blessing and a curse for artists.

The piece is part of All Lit Up, a show featuring illuminated works by Schulte and fellow neon artists Michael Flechtner, Leticia Maldonado, and Linda Sue Price.

If those names sound familiar listed together, it might be because all of the artists were included in a January Los Angeles article entitled “5 Neon Artists You Need to Follow on Instagram” (the fifth artist on the list, Patrick Martinez, wasn’t able to participate in the show). The artists turned the recognition into an opportunity. “We’d been identified as this top five, and so we started shopping around with galleries, checking with our gallery contacts,” Flechtner recalls. “[We asked], ‘Would you be interested in doing a show with the top five neon artists?’ And they agreed.”

It’s hard to imagine a space better suited to All Lit Up than Eastern Projects; the glow from the bent-glass sculptures mounted on the walls and hanging from the ceiling beckons to passersby through the gallery’s floor-to-ceiling windows.

Prior to being featured on our site, the artists were all connected in one way or another. Both Price and Maldonado studied neon bending under Michael Flechtner, and both currently work from his studio space in Van Nuys. Lisa Schulte, proprietor of the neon rental and manufacturing facility Nights of Neon, is a local legend of the craft.

Price refers to her art practice as a “conversation” she has with the glass tubes she bends. “Some days, you know, you have great conversations with your friends and some days you don’t. It’s kind of like that,” she says. “I’ll just start bending shapes until I find something that interests me, then I’ll bend up a bunch of stuff, then I’ll kind of start looking at putting it together to see what it says to me.” One day, while attempting to bend something that would resemble a bird, she inadvertently bent a shape that reminded her of Donald Trump’s swooping tangle of artificially yellow hair.

Maldonado’s work is distinct for the artist’s use of a thinner glass tubing that gives the pieces a more delicate, even fragile look that’s suited to the sentiment behind them. In her artist statement she calls the pieces in the show “a charm bracelet of symbols that represent my current personal experience.” Recently, she lost her live-work space in Cypress Park due to a zoning issue; shortly after that, she and her boyfriend parted ways.

One piece, called I left the light on for you, but I guess you ain’t coming home, features a candle burnt down to a nub; in another pieces, the blossoms of three long-stem roses point downward, making them look like a rejected romantic gesture.

“I do have this,” she says referring to her art practice in relation to recent losses.”This is, like, the main landmark in my life is my creative expressions, specifically with my neon.”

Directly across from Maldonado’s raw display, Flechtner’s work uses humor to poke and prod at modern American culture, in a medium that was essentially developed for purposes of good, old-fashioned American commerce. In a piece called Angst Kraftwerk, he word angst flashes in blue and red around the head of a furious-looking elephant in a party hat; in Moola Tipping Another Sacred Cow, the symbols for yen, euros, and dollars spell out “YES” on the side of a glowing white cow standing atop the words “Jesus Saves”—familiar neon-sign fodder.

Flechtner’s work has been commissioned by celebrities and featured in films—”I think saw one of the Die Hard movies where some of my work was in the background,” he says—but his most viewed work is, without a doubt, the neon “Celebrate” sign featured on a USPS Forever stamp. It’s a populist medium, to be sure, perhaps because textual elements quickly and effectively communicate ideas. Or maybe it’s because glowing tubes of light are just really damn fun to look at. Either way, if you can’t make the show, the recommendation to follow the artists on Instagram stands: @flektro22, @theneonqueen, @lindasuprice, and @leticiamaria.