Home Uncategorized All in the Family 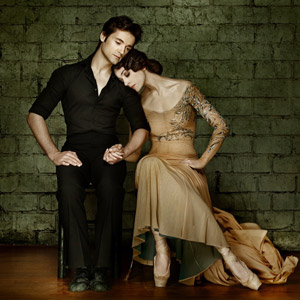 Look no further than choreographer María Pagés’s Soleá—a piece that comes straight from the heart—to understand what makes Spain’s only classical ballet company, Corella Ballet Castilla y León, so mesmerizing. The pas de deux, created for Ángel Corella and his sister, Carmen Corella, is both joyful and soulful, passionate and delicate, a blend of artistry and technique and national pride (it’s set to the flamenco music and Spanish guitar of Rubén Lebaniegos). All of that defines what the two-year-old troupe is about, and during the group’s recent West Coast debut at the Ahmanson Theatre, this vibrant work made the crowd go wild. We were witnessing two achievements: the realization of artistic director Ángel’s dream of finding a home for Spain’s talented dancers as well as his own ability to perform at a level nearly unmatched in the world. His lightning-quick spins and razor-sharp leaps (reminiscent of his American Ballet Theatre days) complemented the elegant but equally fierce moves by Carmen, a principal dancer and the group’s associate artistic director. For these two, sticking with family seems to be a winning formula.

Carmen, in fact, was stunning to watch in each of her performances. In the first set of the evening, Bruch Violín Concerto No. 1, she appeared with the handsome Dayron Vera as one of four soloist pairs. A corps of 16 accompanied the couples, the women beautifully outfitted in colorful tutus and sparkling hair clips. This was a piece that seamlessly mixed athleticism and classic form.

Carmen also took a leading role with Vera in the last piece on the program, DGV: Danse à Grand Vitesse. This conceptual work—about the notion of travel and the passage (and suspension) of time—was high energy and rhythmic. You couldn’t escape the beat, really, of Michael Nyman’s intense score. Kazuko Omori and Herman Cornejo (Carmen’s husband and another familiar name from American Ballet Theatre) paired up as one of four couples reacting to frenetic sequences as well as moments of stillness and calm.

Though DGV didn’t resonate with the audience as well as the other pieces did, Christopher Wheeldon’s For 4—developed as part of the celebrated Kings of the Dance repertoire—was a hit. Fernando Bufalá, Aaron Robison, Yevgen Uzlenkov, and Vera performed powerful solos, dressed in the rich colors of cranberry, chocolate, emerald green, or violet. As each took a turn onstage, the lighting shifted to match their costumes. Again, the juxtaposition of strength and subtlety, of vigor and grace, appears to be this company’s calling card. And that it’s a family effort? Even better.