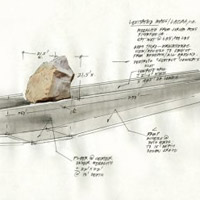 This Sunday, LACMA will finally unveil Levitated Mass a.k.a. The Rock. Will Dwayne “The Rock” Johnson be there? It seems like a missed marketing opportunity if he isn’t. Even Michael Heizer, the artist who conceived the installation, may not be on hand. You, however, can definitely attend. Unlike most fancy-pants art exhibitions, the public is welcome (encouraged, even) to attend The Rock’s debut.

After a dedication ceremony at 11 a.m., the megalith — finally, we can use that word without it merely being writerly hyperbole — will be unveiled. Visitors can wander around and under The Rock until 10 p.m. (The giant hunk of stone is suspended above a 456-foot-long concrete channel that visitors can traverse.) The museum is expecting thousands of people on Sunday, so if you don’t make it on opening day, the 340-ton boulder isn’t going anywhere.

This is a signature work for LACMA director Michael Govan, who wants to not only put his stamp on the museum but to elevate the museum into a national and international trendsetter. And if “normal” (i.e. non-art world) people ask, “What in the hell is that?” and “It cost how much?!” all the better. In addition to giving a centerless city a massive monument, it generates the sort of dialogue that makes people think, talk, and wonder what art actually is.

Freebie Alert: Residents who live in zip codes along the Rock’s transport route from a Riverside quarry to the Miracle Mile, can receive free museum admission from June 24 to July 1. Even better, visitors who purchase a general admission ticket to LACMA through June 30 will get a free summer pass good for three full months of membership benefits including free admission, exhibition preview days, and discounts in the store, and on films, concerts, classes, and more.