Home Uncategorized All for the Hall 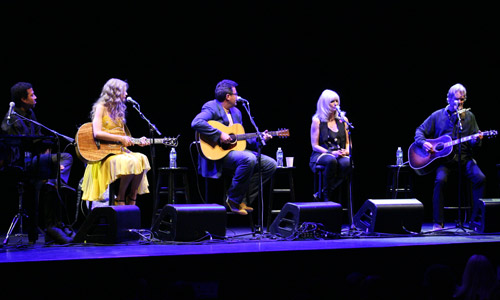 Over 50 years of music converged onstage at Club Nokia on September 23 as pop country star Taylor Swift joined revered veterans Kris Kristofferson, Emmylou Harris and Vince Gill for the annual All for the Hall concert benefiting Nashville’s Country Music Hall of Fame and Museum. In addition to the country folks, the special guest of the night was pop and R&B star Lionel Richie.

The evening was set up as a traditional “guitar pull,” each musician casually taking their turn talking about and then playing a song. Kristofferson, 74, set the bar high for the evening by starting things off with his classic “Help Me Make it Through the Night.” After admitting he was nervous before the show, he changed the last line of the song to “Help me make it through tonight.” Emmylou, looking hip at 63 in a sleeveless dress and leggings, followed with her 1975 hit “If I Could Only Win Your Love.” Vince Gill, the glue of the group both musically and socially, performed new songs he’s been recording in his home studio.  Sitting center stage, deftly noodling on his guitar with every performer, he kept the banter and humor flowing (and provided a perfect imitation of a Willie Nelson guitar solo, too). Then it was Swift’s turn. Dressed in bright yellow from head to toe, she said “This is so cool” and “These are the best role models I could have,” once the screams from the teenage girls in the audience died down. Both Richie and Kristofferson tapped their feet as the 20 year old sang about love from a younger point of view in her latest single “Mine,” prompting Emmylou to give the star a word to the wise on the complexities of love: “It never changes.” Richie was up next, and after telling us there really are no musical categories (turns out he has been a member of the Country Hall of Fame for 25 years) he performed “Hello,” a hit long before Swift was even born, on the piano. The star, who grew up in Alabama, said he too would have played guitar, if only he knew how.

And then they started over, one by one, with somber-themed songs about life’s disappointments and happier ones about finding love. What was clear with every shift in voice, style, and instrument was the mutual respect each artist has for the others, and a love of country music and the craft of songwriting and storytelling—no matter the age.