Home Uncategorized ALF, The Movie: 5 Men Who Could Play the Extraterrestrial 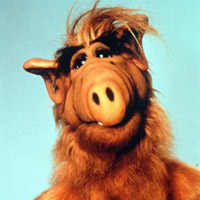 From Melmac to movie screens, here’s one more thing you can blame on Gen X: Hollywood is trying to land 1980s sitcom ALF in theaters. Sony Pictures Animation has acquired the rights to the show, according to The Hollywood Reporter, and will develop it into a hybrid CG/live action feature with the help of the original show creators and the guy who produced The Smurfs movie. (Memo: If humans are interacting with animated creatures, it helps to have a sexy female like Jessica Rabbit or Jennifer Love Hewitt in Garfield.)

What a long, strange trip it’s been for the cat-eating extraterrestrial who crashed into a suburban garage and onto American televisions. Cancelled in 1990 after four seasons, ALF lives on in pop culture glory as one of the best bad sitcoms ever — and the 1980s offered some serious competition. Before you go crying, “But where’s my Small Wonder reboot?!” (starring Ellen Page, naturally) or “Why haven’t they done a My Two Dads movie?” consider who might play ALF. You don’t have to live six parsecs past the Hydra-Centaurus Supercluster to appreciate these casting suggestions.

5. Bill Murray – We’re in love with the guy. He can do anything (even star in a comic book). If he sat and flipped through his iPhone contacts, pausing occasionally to arch an eyebrow, we’d probably watch.
4. Robert Pattinson – In this broody, sunken-eyed take on the character, ALF isn’t just a literal alien, he’s alienated, self-absorbed, and questioning his identity. In other words, he’s a teenager. Getting all Method-y and throwing himself into the role would be a great way for Pattinson to stop drunk-dialing Kristin Stewart. And it would let him mix it up after his decidedly less cuddly and more psychopathic turn in the movie adaptation of Don DeLillo’s Cosmopolis.
3. Ed O’Neill – Playing the Modern Family patriarch has breathed new life into the career of one of our favorite — but often underrated — ’80s sitcom stars. As Jay Pritchett, O’Neill has found the ideal balance between gruff and loveable, a quality that would translate well to ALF.
2. Nick Offerman – With the Ron Swanson mustache and bouffant, he’s already halfway to ALF. Offerman is also a brilliant deadpan comedian. Would he play ALF straight or ironically? He’d never tell and we’d never know.
1. Idris Elba – Just because. Also, the big copout of the sitcom was that after all his threatening, ALF never actually ate a cat. If felines were Stringer Bell’s favorite delicacy, he wouldn’t let an impudent kitty cross his path without doing something about it.