Home Pop Culture Who Is the Real Alex Trebek? I Think I May Have Caught... 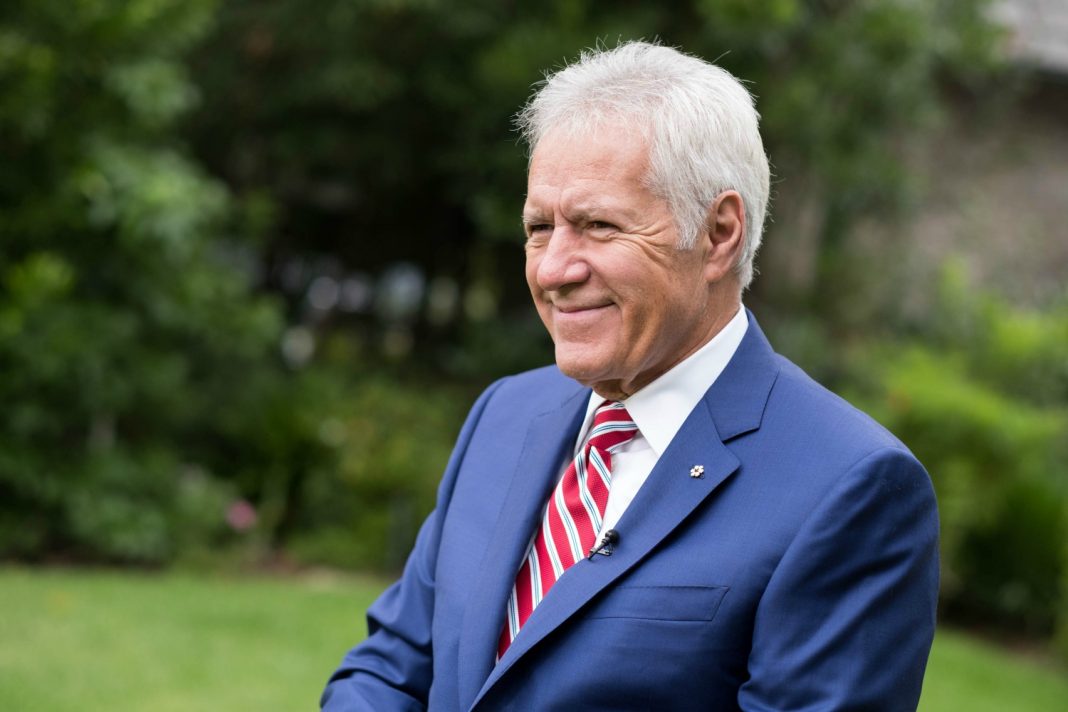 A few weeks ago, I attended the last taping day of Jeopardy!’s 35th season. Accompanying me were eight of the show’s most beloved and memorable contestants, including All-Stars Ken Jennings, Brad Rutter, Austin Rogers, Pam Mueller, and Alan Lin.

We’d come together to pay our respects to the show and to host Alex Trebek, who recently revealed that he’s been diagnosed with stage 4 pancreatic cancer. For me, the revelation had hit particularly close to home. My favorite cousin received the exact same diagnosis last fall, shortly before my own five-episode run on the show aired in December. His last email to me before he passed was, “You made us all proud.”

So it was an emotional day as we gathered to show our appreciation to the man who has been a regular and towering presence in our lives, having hosted every episode of Jeopardy! but one since its 1984 reboot. Politicians come and go, sports dynasties rise and fall, but Alex endures, a reassuring and consistent source of knowledge and grace in an ever-changing and often confusing world.

But it’s that very professionalism that can make Alex seem somewhat remote and even smug at times. And so after you’ve appeared on Jeopardy! the one thing your friends always want to know—besides “Did you win?”—is what’s Alex really like?

The short answer is that no contestants know. For one thing, there are federal laws governing game shows that make it advisable for Alex to keep his distance. More importantly, there are just too many of us. The numbers tells the story: Jeopardy! tapes 230 new episodes per year, at the rate of five per day twice a week, except during hiatuses. As Buzzy Cohen, the reigning Tournament of Champions winner, notes, “Alex is a big part of our lives but we’re such a small part of his. Even a five-day champion is for him just one day’s work.”

Former college tournament finalist Hans von Walter, now completing his residence in psychiatry, explains it in more clinical terms. “Studies show that most people are capable of forming an emotional connection with at most 150-200 people (meaning they can remember their names and faces without a prompt). Jeopardy! puts on over 400 new contestants every year. There’s no way he can remember us all.”

Obviously, some contestants prove the exception. Alex reportedly had a tear in his eye when Ken Jennings, who holds the record (74) for the most consecutive wins in regular-season games, was finally eliminated. And he will no doubt remember James Holzhauer, the Las Vegas sports gambler who has shattered pretty much every other record in the book.

But for most of us—even those the Twittersphere is convinced Alex really, really likes—we’re a fungible lot. I had some spirited interactions with Alex during my five-day run. People were sure I was his favorite. Yet during that last taping day of the season, Alex had to ask the producers who I was. I’m not upset. It’s Alex’s job to make us (and the audience) believe that we contestants are witty, funny, and smart enough to impress even him. And as his eight Emmy’s for Outstanding Game Show Host (second only to Bob Barker) prove, he’s damn good at it.

But what I learned in talking to some of my fellow former champions is how differently we perceive what we believe to be the “real” Alex. Recent five-day champion Steven Grade of Atlanta—who found Alex kind, warm, and generous—told me that in his experience, Alex never comes across as an actor putting on a performance. Cohen, on the other hand, says he never gets “warm and fuzzy” from Alex, and thinks he comes across more as a disapproving professor. Yet Cohen insists it’s just an on-camera persona. “He’s just a dude, you know? He’s aware of his place in pop culture and isn’t self-serious about it,” Cohen says.

Perhaps what All-Star Pam Mueller told me sums it up best: “You can project what you want onto him. He can be so many things to so many different people. He’s the smartest guy in the room but he’s also Uncle Alex”—or as Von Walter puts it, “your college professor uncle, home for Thanksgiving and waxing poetic on the couch after a few Chardonnays.”

The one thing that all of us can agree on, however, is that off-camera Alex is looser and funnier. During commercial breaks he chats with the audience, responding to questions that he’s answered a thousand times before, all with good-natured tolerance, but not hesitating to toss out witty quips and zingers and even the occasional double-entendre. Holzhauer says Alex told him during their post-game chats that he doesn’t gamble because “I can win a thousand dollars and not care, but losing $20 pisses me off.”

And while Alex never crosses the line, he does at times enjoy walking up to it. When we posed on that last taping day for a group photo in front of the game board, with Alex’s arms around Pam’s and my waists, Alex playfully quipped, “Is this my Joe Biden moment?”

Perhaps this was just another instance of Alex nudging that line with the toe of his perfectly polished dress shoe. Or maybe it was a man using humor to deal with the possibility that it could be his last day on the set that has been his home for 35 years. The five-year survival rate for pancreatic cancer is less than 10 percent (though it should be noted that outcomes can vary dramatically and we don’t know all the facts in Alex’s case).

Regardless of what happens, however, the show will go on. It’s too good for its fate to rest on the shoulders of any one person, even one who many viewers and contestants think of as synonymous with Jeopardy!

After taking the group photo, we sat down in our seats to watch the afternoon session of taping. All too soon it was time for Final Jeopardy of the season’s final show. If we hadn’t known better, it would have seemed like any other day rather than the possible end of an era. During the commercial breaks, Alex came out and answered more audience questions. We learned that growing up he wanted to be Prime Minister of Canada and that he has a thing for Ava Gardner.

The last commercial break ended. The Final Jeopardy clue was revealed and the champion metaphorically crowned. The production assistants put their fingers to their lips to indicate to the audience that the cameras were still rolling as Alex shook hands and chatted with the contestants.

And then Season 35 came to a close. The audience fell silent as Alex walked to the front of the stage. He said a few words of thanks before announcing that the show would resume taping in July. Then he turned his back and walked offstage, too quickly to see every last audience member jump to his or her feet and beginning clapping furiously. Surely, though, he heard us chanting his name at the top of our lungs: A-LEX! A-LEX! A-LEX! If he didn’t, there was longtime announcer Johnny Gilbert to remind him. “Alex,” Johnny said, into his microphone, “they want you to come back out.” But Alex didn’t appear, and gradually, the chanting and applause trailed off. The audience began filing out of the studio.

A few minutes later, only the crew and the former contestants were left. As the nine of us discussed where we should go for a drink, I happened to glance at the stage. At the back stood Alex, barely recognizable in jeans, a jacket, and a baseball cap. Ever so briefly he lifted his cap and nodded in our direction. Not looking for more accolades. Not even caring whether anyone had noticed. Just a final acknowledgement and then he turned and walked back offstage, hopefully not for the last time. After all, who among us doesn’t need a favorite uncle to encourage us to learn, be disappointed when we fall short, wink when we get his jokes, and remember to send us a birthday card every year whether or not he remembers which one we are?

So what is Alex Trebek is really like? I’m still not sure, but I’d like to think I got to see a flash of it in that brief, slightly surreal tip of the cap. A moment more unreal simply by getting to experience it with eight other people to whom the show means as much as it does to me.

If you haven’t been watching Jeopardy!, now is a great time to start. Not only is Holzhauer demolishing records at a furious pace, but what better way is there to pay tribute to Alex Trebek, the man Jennings calls “our generation’s Walter Cronkite”?

And if you’ve ever dreamed about being on the show, just try. Sure you might fall to a Ken Jennings or a James Holzhauer, but winning isn’t the only reason to compete and losing isn’t the worst thing in the world. As Alex would probably tell you, the only fault lies in not trying at all. Plus if I hadn’t reached for the stars, I’d never have gotten to be a part of Uncle Alex’ extended family. One that contains some of the smartest, funniest, kindest and most generous people I know. And I’d never have seen that hat tip.

Pipes and Stoves in California Homes Are Spewing Carcinogenic Gas