Home Politics Known for His Haunted Houses, Albert Reyes Takes on the Nightmare of... 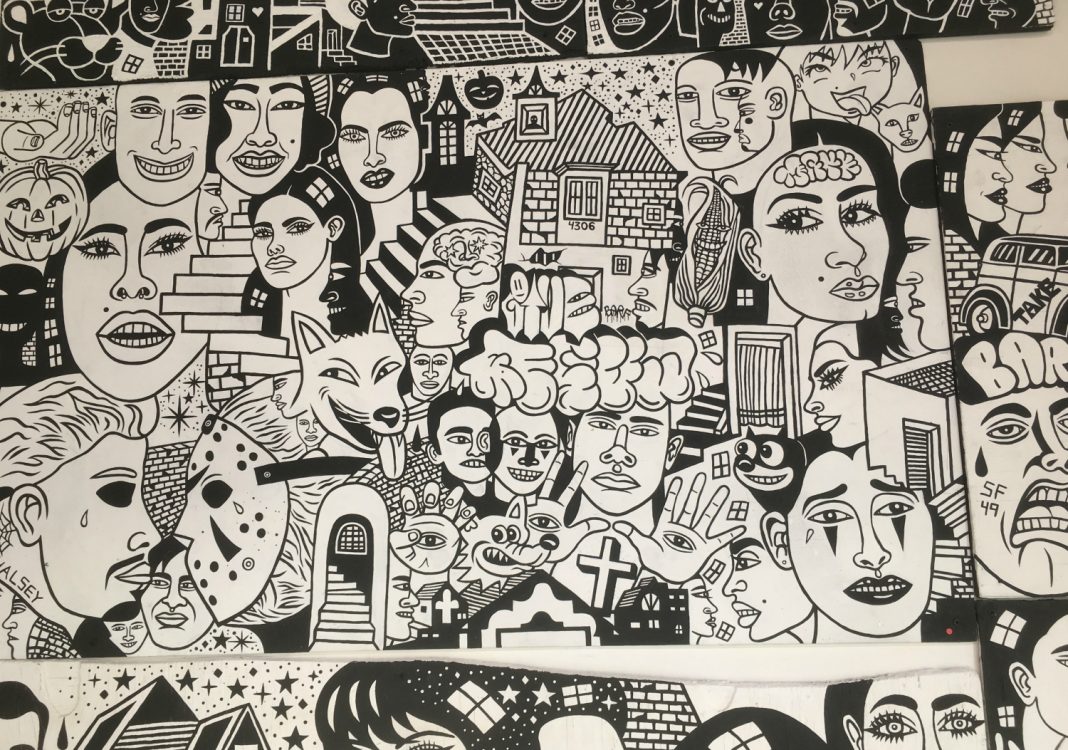 Inside Chinatown art gallery Eastern Projects, Albert Reyes recalls advice he received years ago: “Your job as an artist is to be like a reporter, to report what’s happening in our culture and in our world.”

Reyes adds, “I really took that to heart.”

It’s the day before the opening of his latest solo show, Dreamers of the American Dream, and Reyes is standing in front of a painting of Donald Trump. In fact, he painted the president three times, and the first lady once, on a large slab of wood. Then he hung it upside down. “I don’t want people to think this is a respectful thing,” he says. But, the guy in the White House wasn’t someone he could ignore. “You can’t pretend that he doesn’t exist,” he says, “but what you can do is flip him on his head.”

In an ample collection of paintings and drawings, the El Sereno-based artist has tapped into issues ranging from abortion bans to the Aliso Canyon gas leak in Porter Ranch. One painting of a multi-ethnic group of people in a pool is aptly titled “We’re All in This Shit Together.”

“We’re in a bloody mess. I’m angry about a lot of things,” says Reyes. “I’m angry about the environment. I’m angry about our government. I’m angry about why we haven’t switched over to clean energies.” While he’s channeled a lot of that anger into his work for this show, it’s not without moments of fun. A series of paintings called The Faces, Reyes merges street art, tattoo and comic book influences. Throughout the show, you’ll see the words “give” and “take,” referencing a balance that Reyes tries to maintain.

“I think the American Dream is about people; they see things that are not right and also correct it…We do end up correcting things.”

You’ll see that balance of ideas on a wall filled with Reyes’s drawings. These include tributes to his art heroes, like Barry McGee and R. Crumb, his cats, and favorite movies. But, there are also messages about war, the history of colonization, and environmental issues. One illustration shows a curvaceous woman wearing a shirt that reads “Just because I’m sexy doesn’t mean you can fuck me,” a message the artist says that people need to hear. Another is the entertainment area of Reyes’s fantasy amusement park, complete with a King Taco, Persian restaurant, old-school arcade, and a goth club.

For about 15 years, Reyes has also built haunted houses in his backyard for Halloween. These annual haunts have become art installations themselves and he’s built versions of them at venues like Pacific Design Center and Superchief Gallery. Reyes’s small, house-like installation inside Eastern Projects is decked out with personal photos and a collection of old remote controls and other outdated electronic gizmos. Reusing items that might otherwise be trashed is part of Reyes’s practice as well; he even recycled wood from his haunted house project to double as canvases for paintings in this show. There’s also a collection of wrecked fast food cups with jack-o’-lantern faces carved into them. Reyes found discarded cups across the city and started collecting them because he liked the art and was “tired of seeing them all over the streets.”

The American Dream is complicated and messy. “If you go anywhere in L.A., you realize that the American Dream isn’t working very well for a large, large part of the population,” Reyes says. But there’s an optimistic flip side too that shines through his show. “I think the American Dream is about people; they see things that are not right and also correct it,” he says. “We do end up correcting things.”