Home Theater Alan Mandell Will Finish His Stage Career the Way He Started It:... 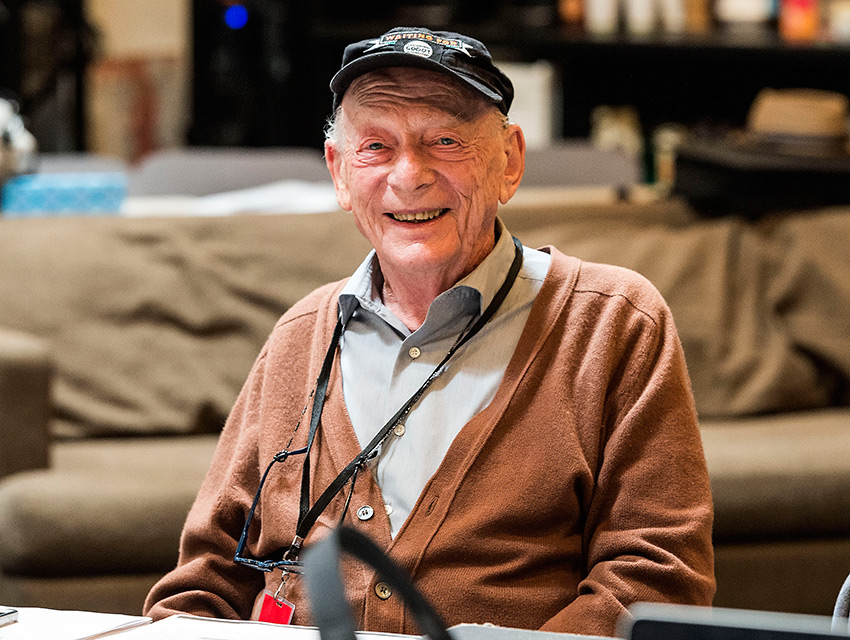 “It is hard work,” actor/director Alan Mandell says of performing on stage. “I’ve told someone who asked me about learning lines that it was easier when I was 85.” Yet here he goes once more onto the boards in a new production of Samuel Beckett’s Endgame. The show begins previews this weekend and officially opens at the Kirk Douglas Theatre on May 1.

“I’m getting there,” Mandell says regarding the preparation for his role. He plays Hamm, one of four characters who are perhaps facing oblivion. (Two of the characters live in trashcans, so it would seem they’re halfway there.) “I wake up in the middle of the night going, ‘What was that line?’” he says. “I wake up and [the script] is by my bed. I try to go back to sleep.”

The script by his bed contains notes and changes made by Beckett himself. “He was always making notes,” Mandell says. “He was forever correcting and eliminating. I remember when we were in Rome there were all these people in the audience with scripts in their hands. Afterwards some of them came back and said they liked the performance, but you left out these sections. I said, ‘Oh, no, Beckett made some cuts.’ They followed it so religiously. The fact that he had cut sections was a shock to people, but he was always doing that.”

The first time he appeared in Endgame, Mandell found himself rehearsing with the playwright. “When I first did Nagg, the Nell hadn’t arrived,” he says. (Nagg is Hamm’s father; Nell is Hamm’s mother.) “Beckett turned to me and said we should do the Nell/Nagg scenes. ‘Why don’t we pull up two chairs? I’ll do Nell and you do Nagg.’ Talk about being on the spot. We did the whole scene, and at the end he said, ‘You are going to be very good.’ It doesn’t get any better than that.”

The pace of Endgame was important to the playwright, and it’s just as important to Mandell. “He called it a chamber piece in eight movements, and he marked the eight movements in my script. Beckett mentioned if it is longer than 90 minutes, you’re doing something wrong. So I put myself on record—the runtime has to be less than 90 minutes. I don’t care if it is 80 or 90 minutes, as long as you keep the rhythm and the poetry of the piece there, that’s fine.”

“The other thing about this production that I love,” Mandell says, “is that I’m 88. Jimmy Greene, who plays Nagg, is 89, and Charlotte Rae, who is one of the Nells, is 90 on the 22 of this month. This must be one of the oldest casts in America!” (Rae alternates the role of Nell with Anne Gee Byrd.)

Speaking with Mandell you get a sense of how much Beckett meant to him. “I loved him,” he says. “This was the most honest, decent man—a wonderful man. He was a totally loyal friend and very generous. He’d get a royalty check of several thousand dollars and send it to somebody he felt needed it. He never asked for anything. He did all these things that people never knew about. He cared deeply about the people who worked for him and the people who did his work and were loyal to him.”

Though Mandell is considering one more stage role on Broadway, he says Endgame will make the conclusion of his stage career in L.A. “This is it,” he says. “There are other things I want to do. I’m at that time of my life when I look at my so-called bucket list, and there are places I want to go. I better travel while I’m able to do it. I won’t put myself through this again.”

What Do You Have in Common with The Absolute Brightness of Leonard Pelkey?