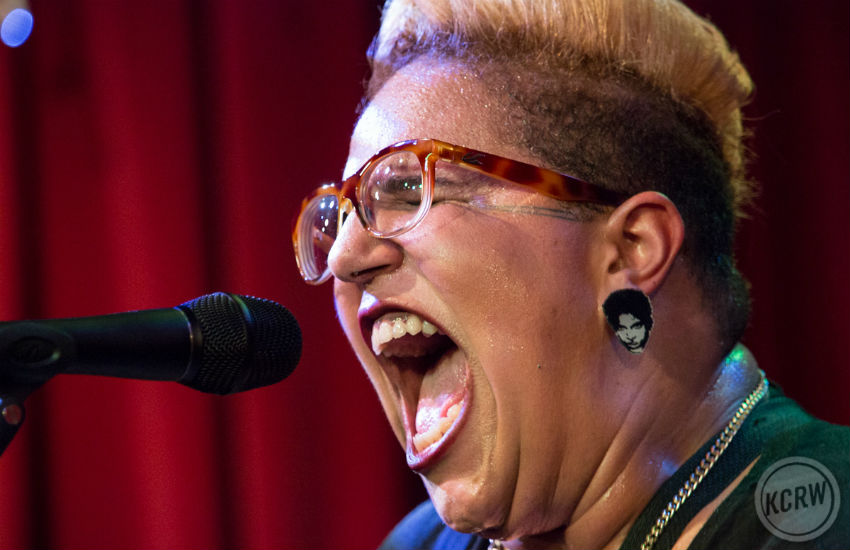 Alabama Shakes brought their fervent soul-rock to Apogee Studio Monday night as part of KCRW’s Apogee Sessions, an intimate series showcasing some of today’s most inspiring musicians. Carried by lead singer and guitarist Brittany Howard’s explosive vocals, the nine-piece ensemble played 14 songs, the majority of which appear on their new album Sound and Color, to an audience of roughly 180 people.

Beginning with the chill-inducing “Miss You,” the band filled their hour-long set with sweeping outpourings of lush, heady arrangements. Most of the songs feature Ben Tanner’s electric organ, which adds gospel intensity and a preacher’s gravitas to Howard’s soul-powered singing. In addition to the double decker organ, Tanner worked a standard keyboard and a synthesizer—at times simultaneously—as if they were extensions of his own body.

The influence of 1960s soul is apparent throughout the band’s repertoire, but songs from Sound and Color pull from other eras and genres, combining to create what is ultimately a very contemporary sound. Drummer Steve Johnson set the manic pace on “The Greatest,” a mixed tempo surf-style tune, while bassist Zac Cockrell—looking like a young George R.R. Martin—undercut Howard’s spitting delivery with a funk-fueled ’80s bass line in “Don’t Wanna Fight.”

In most cases, a band of this size and intensity would threaten to drown out the lead singer, but most lead singers aren’t Brittany Howard. Cutting an impressive figure with her bleached pompadour and seafoam green Gibson SG, Howard imbued every song with passion, wailing forcefully and sometimes violently from her very core. In “Give Me All Your Love,” she turns what could be a passive sentiment of defeat into a furious, frustrated demand. In “Dunes,” Howard erupts into a maddening chorus of “I think I’m losing it,” between slow, crooning verses, evoking an unsuccessful attempt to quell volatile emotions.

While Howard’s voice often filled the room at gale force, it turned heart-achingly beautiful when given the time and space to slowly build. ”Please don’t take this feeling/if I wanted to I’d be alright,” she lamented in “This Feeling,” accepting her emotional pain as a force of growth. In “Gemini,” Lloyd Buchanan’s harmonies echoed her painful longing for a lost loved one and, combined with Heath Fogg’s weeping guitar and Cockrell’s menacing base, conjured a ghostly, mournful atmosphere.

“Gemini” is unique in its funereal tone, but even Alabama Shakes’ most uplifting songs betray an underlying sense of world-weariness. It’s clear that the band is attuned to the struggles of loving and living, but the powerfully emotional landscape of their music and performance transforms oppressive hardship into a source of power and energy. However exasperated they may feel in the day-to-day, the Apogee Studios performance made it clear that Howard and her bandmates won’t be going down without a fight.

KCRW will stream the session online April 27. Sound and Color is out today (April 21).