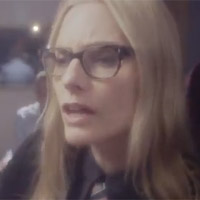 You were just itching for a shot-for-shot remake of the “Voices Carry” music video, weren’t you? Well, neither was Aimee Mann. Yet, here she is, roped into doing just that. The culprit? Director “Tom Scharpling,” who looks distinctly like a certain actor from Mad Men.

Mann’s new album, Charmer, her first in four years, came out yesterday. And to celebrate, here’s the video — we’re not sure if it’s the official clip or just a bonus comedic spoof — of her single “Labrador.” It’s a hysterical remake of ‘Til Tuesday‘s 1985 hit, “Voices Carry,” complete with the an insensitive brute of a boyfriend, an unhappy rock chick, and a braided rat tail. The videos for both are below; decide which one you prefer.