Home Uncategorized After 35 Years, the Gay Men’s Chorus of L.A. Hits a High... 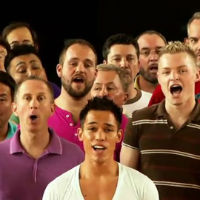 On a balmy July night in 1979, Harold Kjellberg waited inside a room at the Plummer Park Community Center in West Hollywood to see if anyone would respond to his flyers inviting singers to join Los Angeles’ first gay men’s chorus. He was shocked when ninety-nine men showed up for the first rehearsal.

Thirty-five years later, Gay Men’s Chorus of Los Angeles has performed thousands of times, nationally and internationally, for presidents and for TV audiences. The group has more than doubled in size, and under the leadership of newly installed artistic director Dr. Joseph Nadeau, it will begin a year-long celebration of its 35th anniversary with their Holiday Spectacular: Festival of Carols on December 14 and 15. Here are seven fun facts about GMCLA.

❶ Three months after their initial rehearsal, the chorus performed at the March on Washington D.C., the first national concert for lesbian, gay, bisexual, and transgender (LGBT) rights.

❷ GMCLA was originally called the Benjamin Britten Singers, after the midcentury British composer. To commemorate the chorus’ past and the composer’s 100th birthday, the Holiday Spectacular will begin with one of his songs. The group will also pay homage to their historic 1999 visit to Russia, where they headlined the largest LBGT gathering in the country’s history by singing Tchaikovsky’s Nyet, Tol’ka Tot Kto Znal (None But the Lonely Heart).

❸ Nadeau spent the last fifteen years as the artistic director of the Heartland Men’s Chorus in Kansas City, and his choral career goes back two decades.

❹  Chorus members participate in the Alive Music Project by visiting schools, running workshops with their choirs, and discussing the harm of bullying. “The most common question we get is, ‘When did you know you were gay?’” said Nadeau. “Individuals tell their own stories and, in between, we add music that tells the chorus’ story.”

❺ Last November, GMCLA started a small LGBT choral group for 14-24 year olds called Outside Voices. “We’ve had so many wonderful people come in,” said Nadeau. “We will definitely be showcasing them at the Holiday Spectacular.”

❻ Auditioning for GMCLA is a two-fold process. First, prospective members must attend an open rehearsal to get a feel for how rehearsals play out. Then there are individual auditions that involve singing scales, sight-reading, and singing a sample of a song. For would-be Pavarottis, there are two open rehearsals: January 6 and 13.

❼ To promote their Holiday Spectacular, GMCLA recently released a parody of K-Mart’s Joe Boxer ad that went viral. “The talent, the sets, the costumes; we have some outrageous, fun production numbers,” said Nadeau. “You can go to a lot of choral concerts and you will not experience anything like GMCLA. You will laugh, you will cry, you will get goosebumps.”