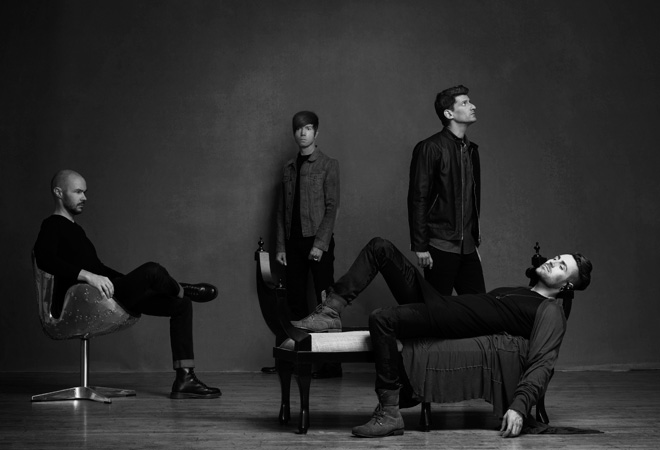 After more than 20 years, a number one hit single, and millions of records sold, NorCal thrash-punk band AFI (almost never referred to by its full name, A Fire Inside) continues to evolve. The first decade of the new millennium found the group on a steep upward trajectory culminating with heavy radio rotation and four critically acclaimed albums. The band’s fan base is among the most loyal in rock, electrified by singer Davey Havok’s ferocious showmanship. In the wake of their ninth studio album, Burials, which debuted in Billboard’s Top 10 in October, AFI will play the first night of KROQ’s Almost Acoustic Christmas on December 7.

On the meticulously produced and brutally direct Burials, the group nods to their melodic past but delves into much murkier territory. We caught up with frontman Havok backstage before last week’s sold-out performance at the Fonda Theatre. Articulate and poised, he’s a striking contrast from the man who will soon be standing on fans’ shoulders bellowing at the top of his lungs as he shares the microphone with them. Havok chatted about the process of Burials and the band’s challenge of staying ahead of its own shadow.

Are you excited to play Los Angeles? You couldn’t have asked for a better crowd.
We couldn’t. Los Angeles has always been our strongest fan base. From the first time we came down here, we immediately had a great reaction. Back home, it took much longer to build up the fan base.

After 20 years, is it difficult to continue evolving?
The evolution of our sound is something we need in order to stay interested in what we’re doing. As we’re writing, the songs that feel best to us and satisfying what we need from a creative perspective inform what is to come thereafter. It’s not atypical for those stronger songs to dictate songs of a similar nature. It’s very organic. It just happens. If we find ourselves writing something that seems too familiar we tend to stray away from it because it’s boring.

Burials is a sonic departure, then.
It was written during a very chaotic period in my life and that chaos really shows in the songs. Musically speaking, it is very different from our last work. Crash Love (2009) was a very direct, straightforward rock record. This is far more layered, more so even than Decemberunderground (2006), which up until then was the most layered record we had created. This has gone even further. It’s never a conscious effort for us; it’s always a natural progression. Whatever feels right, we continue in that direction.

Dark has always been your thing, but there is a certain weight to this record that’s noticeably different.
True. You might be reacting to how direct it is, lyrically speaking. It is by far the most candid group of lyrics. If you look at Crash Love, it’s sociopolitical. If you look at the rest of the records, it’s all personal. But if you look at something like Sing the Sorrow (2003) or Black Sails in the Sunset (1999) or The Art of Drowning (2000), it’s more cryptic. There’s nothing cryptic about Burials.

How was the process of writing this record different from the last few?
The technology that we used in creating the songs really facilitated the songwriting. It helped with our craft. It allowed us to immediately review what we had created and detail the songs in a way that we had never been able to do in the past. The vocals were recorded in a way I had never recorded before. We tracked vocals the entire time as opposed to waiting until the end to track everything, which was refreshing for me.

Also, my dear friend allowed us to write in his house (in Hollywood) and it gave us an environment in which we could work everyday for months and months without any pressing monetary concerns. I have a place in the Bay Area and for years, Jade and Hunter lived down here so it became very, very expensive to write records. If we didn’t have that generosity, we wouldn’t have been able to work that way and a different record would have resulted.

How did working with producer Gil Norton affect the sound of the record?
Working with Gil is great. He’s someone we wanted to work with on Crash Love but timing didn’t allow. We had very thorough demos that we presented to him. He really liked the songs and understood what we were trying to achieve with the record. He was able to pull the detail out of the layers that we had created without losing those layers, which is a very difficult task. He was so dedicated and so passionate; he spent hours and hours working on the record. He would work overtime. He would work on the weekends. He worked on his birthday.

Where do you see the music of AFI going?
You never know. We never know what we’re going to do until we sit down and do it. It’ll be a while before we do it again. We don’t stop until we’ve created a record that we’re very, very happy with. Having done this for 22 years it takes more and more to satisfy us. To tread new paths is more difficult when you have nine records.

Burials is available now. AFI will play along with Kings of Leon, Vampire Weekend, Arctic Monkeys, Foals, Grouplove and others at KROQ’s Almost Acoustic Christmas on Dec. 7.