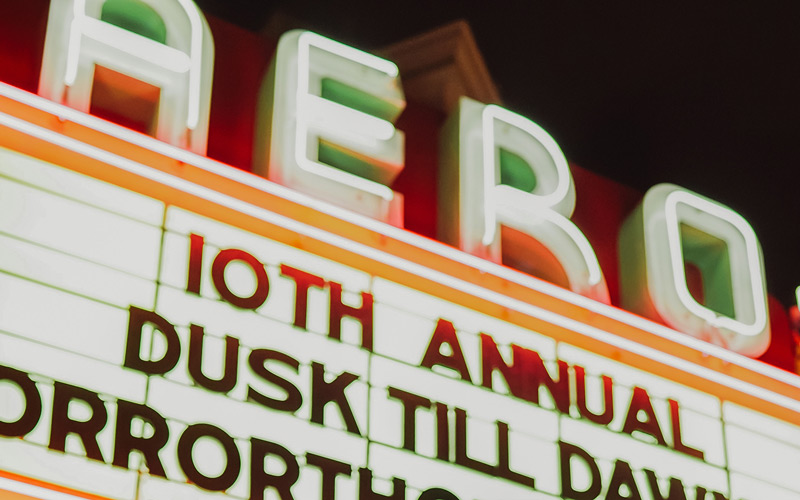 For horror movie fans, there’s only one place to be the night of Saturday, October 28, 2017—the Aero Theatre (1328 Montana Ave., Santa Monica), which is hosting its 12th Annual Horrorthon. Starting at 7:30 p.m. the theater will screen seven horror movies, and between films there will be free food and energy drinks, giveaways, short films, and appearances by special Horrorthon characters like the Corn Gorn. “The event is weirder and stranger than it sounds,” says Grant Moninger, who organizes the dusk-til-dawn marathon.

If you’ve never been to the Horrorthon before, Moninger warns, “It’s almost like you’re going into some kind of absurd church of horror films.” Moninger is a film programmer at American Cinematheque, as well as a voice actor, a skill that comes in handy during the Horrorthon, because he voices all the characters that appear on stage.

This year’s schedule includes An American Werewolf in London, Popcorn (a horror film that takes place during an all-night horrorthon just like this one), The Tingler, Hack-O-Lantern, Shocker, Brainscan, and Death Bed: The Bed That Eats.

Moninger says, “We don’t repeat a movie. Every year, we have a blue chip, like American Werewolf in London—something that’s a classic that everyone knows—and we spend a year looking for prints that no one has seen yet. Hack-O-Lantern has not been shown in years.” He emphasized that while things get loud between films, everyone settles down during the screenings.

Tickets to the Horrorthon are $25 ($23 for students and seniors, $20 for members). Online ticketing has closed, but the Aero box office will be open on Saturday starting at 6 p.m. If the event sells out, there will be a standby line, and more people will be admitted as seats open up throughout the night. Parking in the area is free after 7.

RELATED: There’s a Pop-Up Halloween Bar in Silver Lake Where The Lambs Have Not Stopped Screaming